One of my all time favorite memories of Hawaii is the day some friends and I kayaked out to Chinaman’s Hat and did an epic barbecue on the beach.

We spent almost the whole day kayaking, snorkeling, and soaking up sun and nature. It was legendary stuff, and it makes me miss Hawaii every time I think about it.

What Is Chinaman’s Hat?

Chinaman’s Hat, sometimes called Mokoli’i, is a neat little mini island that got its name from the unique shape that looks kind of like a traditional Asian rice farming hat.

It’s located on the east side of Oahu near Kualoa Regional Park, and the best way to reach the island is by kayak, but you can also wade to it when the tide is low.

We loaded up 3 kayaks with 5 people, a drone, a small bag of charcoal, a cooler of meat, and a 20 inch portable grill, and set off into the wild blue yonder.

To protect our phones, drone and other water sensitive things, I brought a 30 liter Earth Pak dry bag

which fit the bill perfectly. They also make 10, 20, and 40 liter versions

Definitely bring at least one dry bag for this trip! There were many times where we almost tipped our kayaks, so we could’ve lost our stuff if it wasn’t for the dry bags! 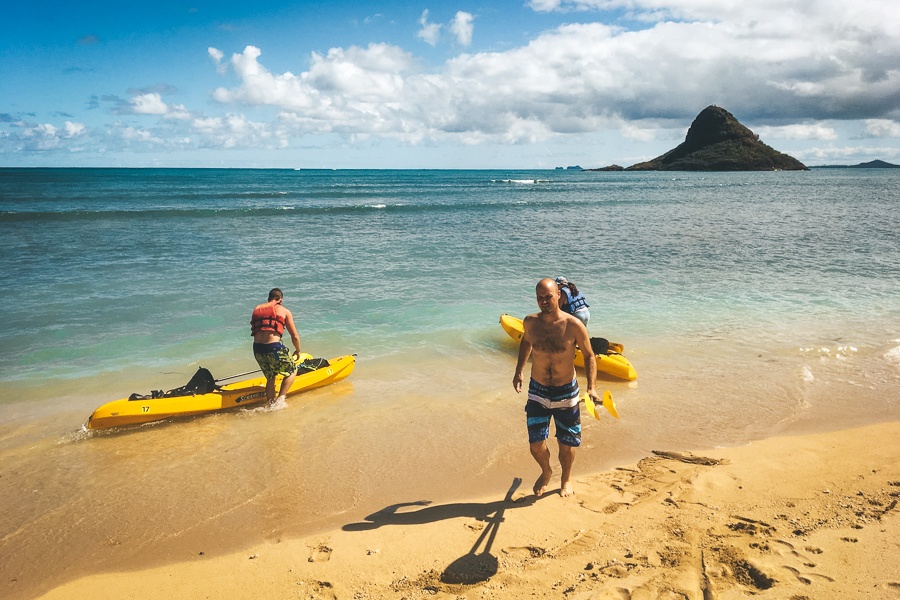 The kayak journey from Kualoa beach to Mokolii island was pretty straightforward and only took about 30 minutes, but it seemed longer in our heads because we were trying our very best not to flip over and drop all of our stuff into the ocean as a gift to the fish.

Landing on the island went smoothly, but the rocks can be slippery so watch out for that when you first step off the kayak. We pulled them up on the rocks so they wouldn’t float away.

We were now standing on the brim of the Chinaman’s Hat! 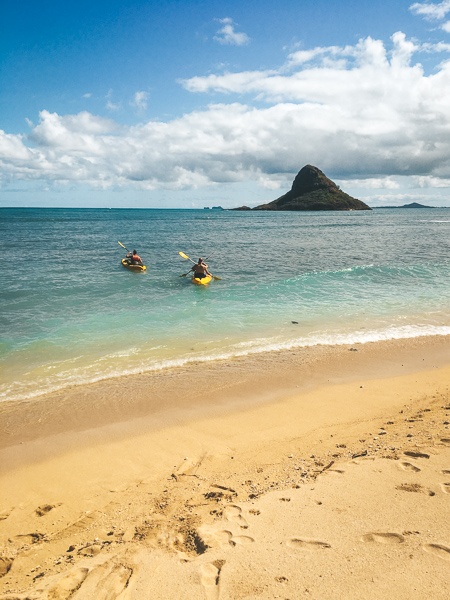 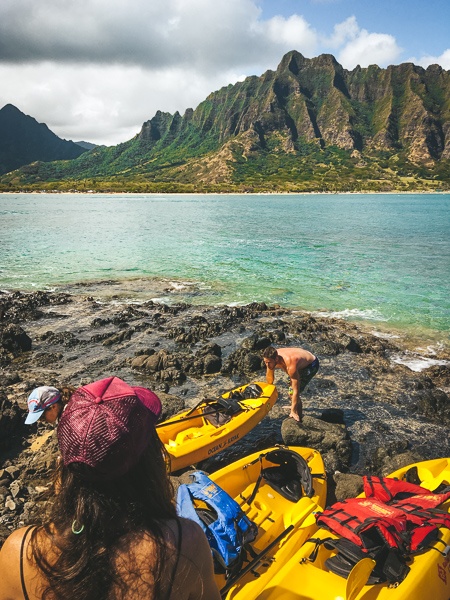 Cooking lunch was the next order of business. We were able to bring just enough meat and charcoal to cook up a storm.

Chef Tony got the grill started and put on some meat strips and brats, while the girls snorkeled near the shore and I flew my DJI Mavic Pro drone for some shots of the island from above.

What transpired over the next hour was a blur of foodie awesomeness that probably set some kind of accidental Guinness World Record for the most scenic BBQ ever.

To me, these kinds of adventures are what Hawaii is all about. 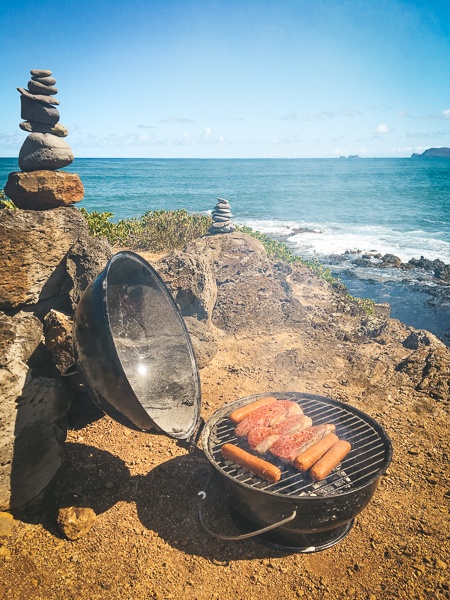 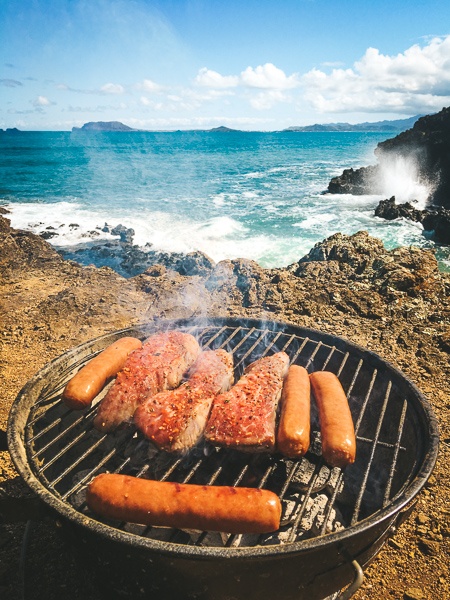 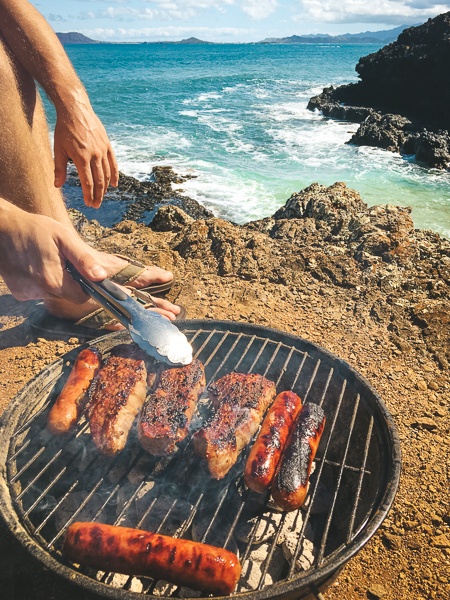 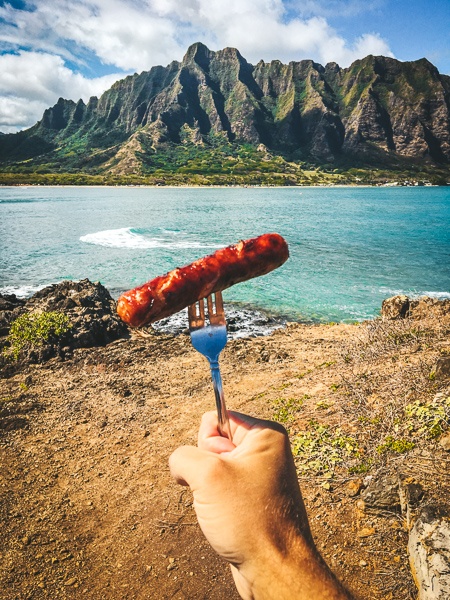 With lunch out of the way, our next plan was to climb to the top of Chinaman’s Hat. We gathered everything up and paddled the kayaks around to the front of the island, where the path to the top starts.

The hike to the top of the hat is a fun, rocky scramble that takes about 20 minutes and you’re rewarded with some amazing views of the Ko’olau mountain peaks.

With that said, it’s MUCH steeper and more challenging than you’d think, so take it easy and wear shoes. People have fallen and died on this hike. I had sandals on, and at one point I was sure that I’d made my last mistake.

Three of us pressed on and reached the top safely, then we stopped to admire the 360 degree panoramic view of the windward coast of Oahu.

To the left we could see Kaneohe Bay stretching out in the distance, and to the right we could see the Ko’olau mountains, where Jurassic Park was filmed. 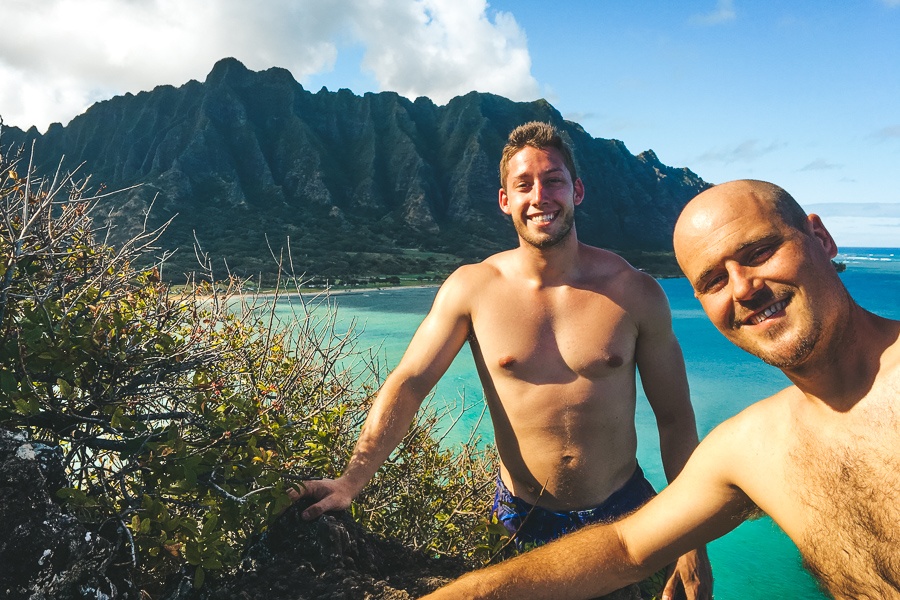 It was pure scenic bliss, and we would’ve been happy to stay there all day.

Alas, our kayak rentals needed returned by sundown, and the Kualoa beach park gates close at 8 PM, so we had no choice but to get going.

All in all, the trip to Chinaman’s Hat was easily one of the most memorable days I spent in Hawaii, and probably one of my all time favorite travel moments anywhere.

How To Get To Chinaman’s Hat

Mokoli’i Island (Chinaman’s Hat) is located on the east side of Oahu island, about 1/2 mile out from the nearest beach at Kualoa Regional Park.

The kayak trip to the island takes 30 minutes one way, and the hike to the top of the rock takes 20 minutes. Neither are super strenuous, but you’ll want to bring some bottled water for sure.

At low tide it’s possible to walk and wade to the island instead of kayaking, but be extra careful if you do this, and be knowledgeable about high and low tide times or you could get stranded on the island.

Two other good options in Kailua are Kailua Beach Adventures or Windward Watersports.

Bring life jackets and water shoes, even if you kayak. A number of people have died here over the years.

Remember to pack out any waste you pack in. We cleaned up after ourselves (of course), and didn’t notice any trash on the island, so hopefully it stays that way!

Take note of the above precautions and you’ll have a great trip. This is Hawaii after all. Be safe and have fun! 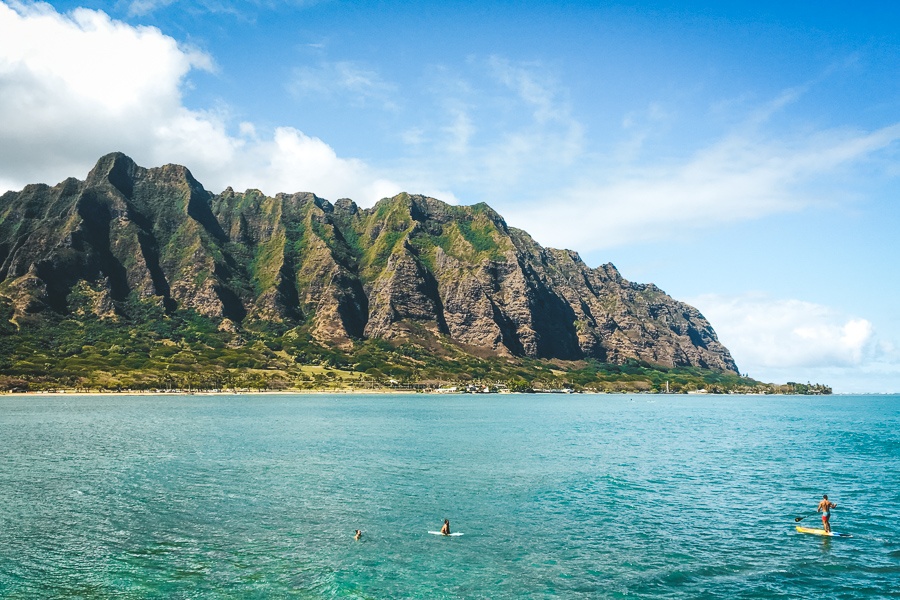 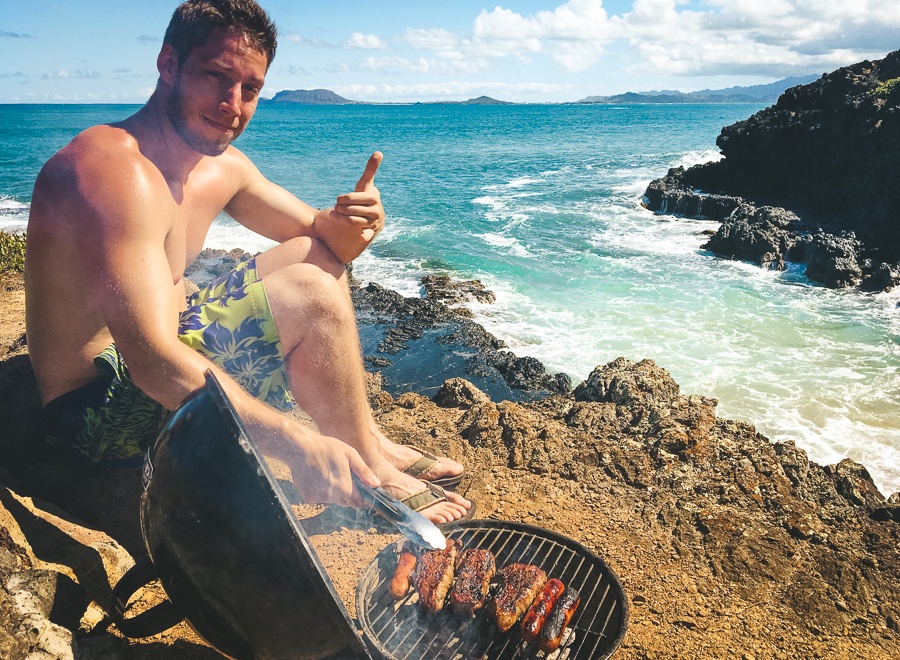