One of the most photogenic places in New Zealand is actually a movie set — from the popular ‘Lord of the Rings’ series!

Hobbiton village was filmed on green farmlands in the North Island, and fans will be thrilled to know that they’ve kept the entire movie set intact for people to tour.

My wife was in love with this place. If you’re a fan of the LOTR series, or fantasy movies in general (or even if you’re just a hobby photographer), don’t miss out on it! This was one of the highlights of our New Zealand trip!

Contents hide
1 What Is Hobbiton?
2 Where Is It?
3 How To Get There
4 What To Expect
5 Best Time To Visit
6 Where We Stayed
7 Hotels In New Zealand 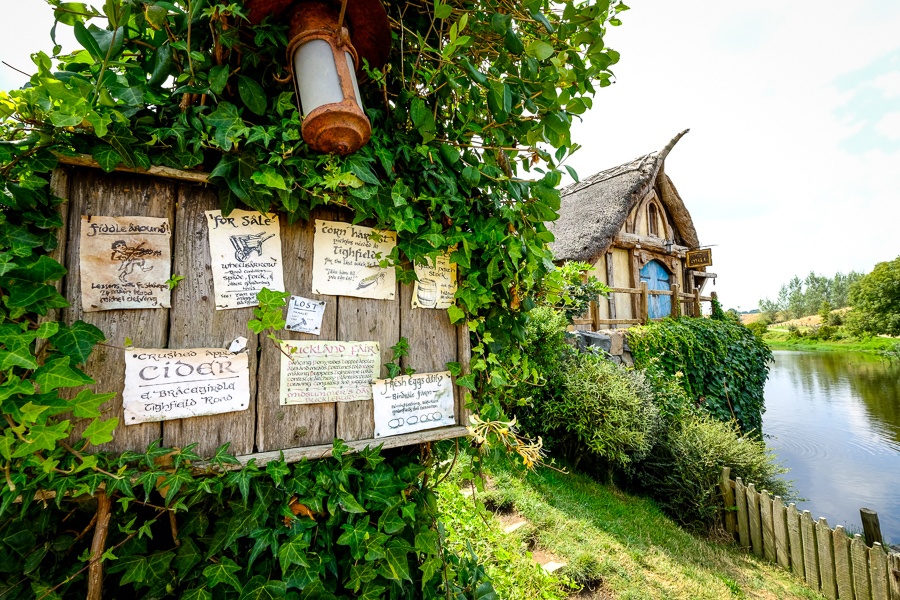 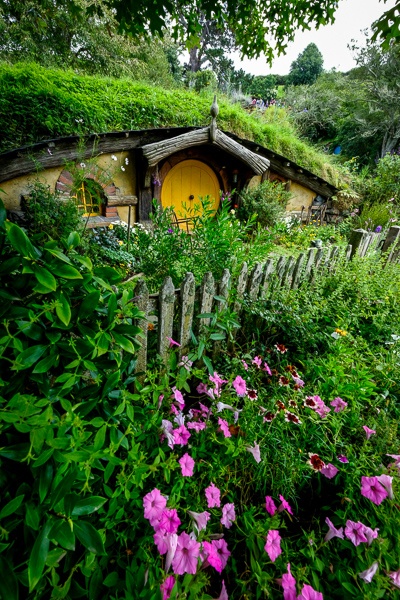 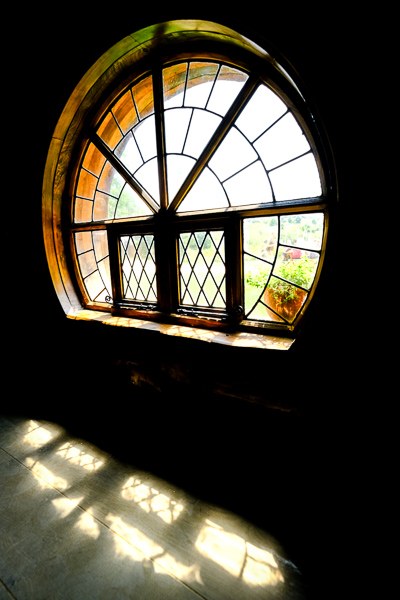 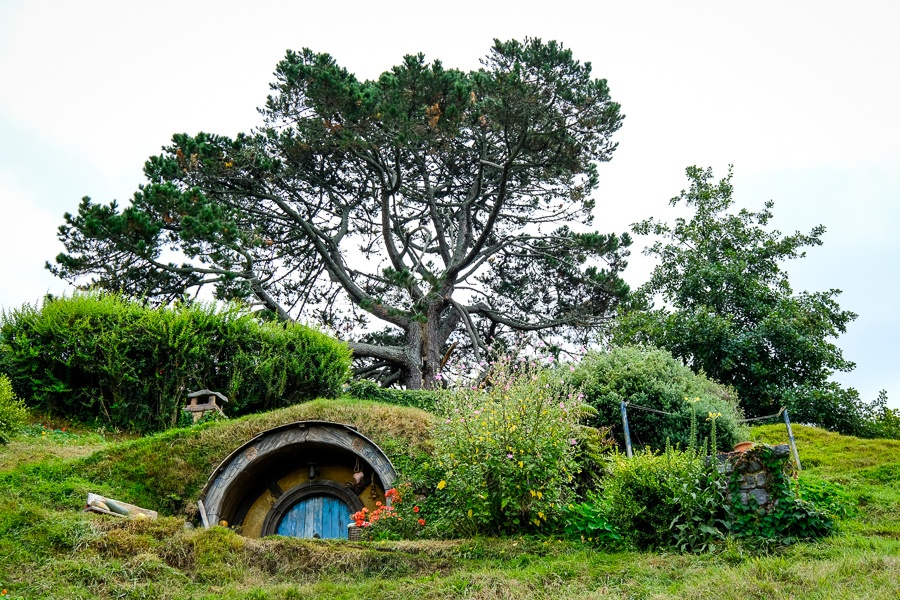 Unless you’ve been living underground (no pun), you’ve probably heard that New Zealand is where the award-winning ‘Lord of the Rings’ and ‘Hobbit’ trilogies were filmed.

In the books (and movies), the Shire is the peaceful green countryside where the protagonist hobbits live. Synonymous with peace and quiet, Hobbiton is a village paradise complete with dozens of little turf covered houses that look like something out of medieval England (with a fantasy twist).

The Hobbiton movie set was first created for ‘Lord of the Rings’ in 1999, with road-building help from the New Zealand Army, and then the set was completely rebuilt and expanded in 2010 for the ‘Hobbit’ movies.

The current set you see today has 44 hobbit homes, farms, and gardens, and covers 12 acres!

The Hobbiton movie set is located just outside of Matamata, a tiny town on the North Island of New Zealand.

From the city of Auckland, it’s a 2 hour drive through small towns and mostly rural roads.

You can self-drive (cheaper and recommended), or there are bus tours starting from Auckland that do all the driving for you.

Either way, a walking tour is required for visiting the movie set, and you will want to make an online booking at least a few days in advance, because the tickets do sell out, especially if you’re wanting a specific time slot.

Klook has meet up (self drive) Hobbiton tours for $47 USD

or they also have more pricey private day tours from Auckland

that include hotel pickups and everything else you might need. 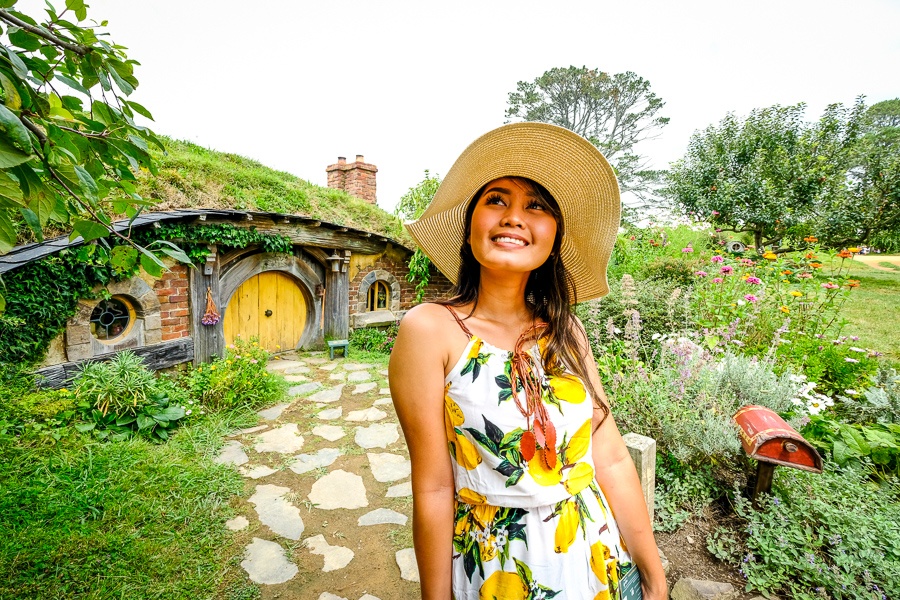 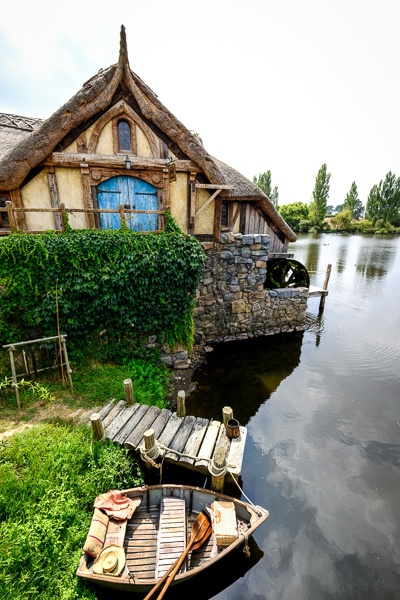 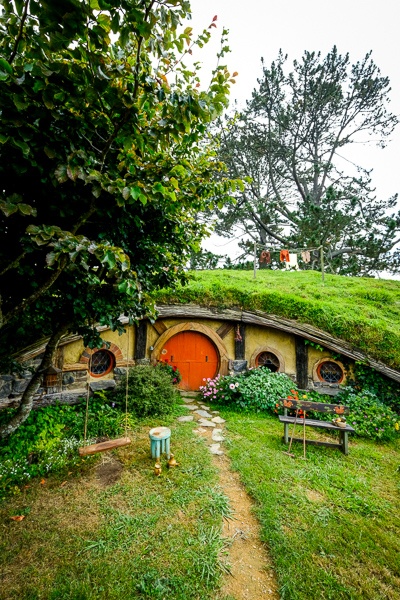 Visiting the Hobbiton movie set requires a walking tour, and these run daily with dozens of time slots to choose from between 9:00 AM and 5:00 PM.

Unless you’ve booked a private tour (very pricey!), this also means you will be on a shared tour with other LOTR fans eager to relive their favorite movie memories.

Our group had about 25 visitors and, compounded with the other groups touring the set at the same time, I have to admit it felt pretty crowded on the narrow paths winding through the village. 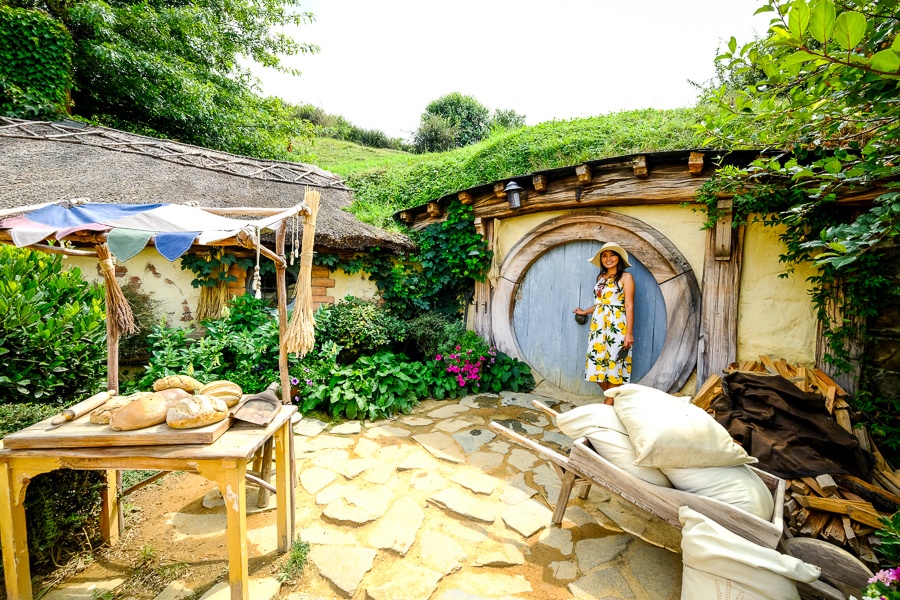 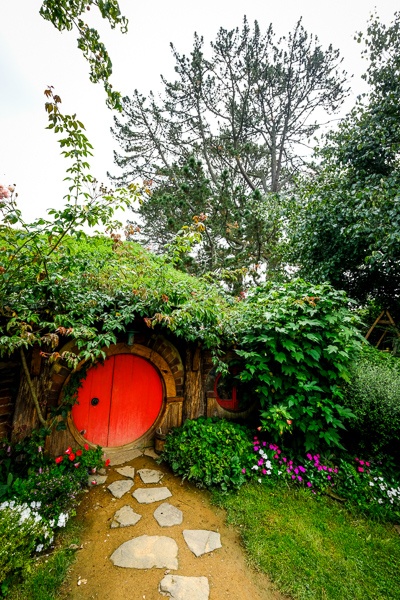 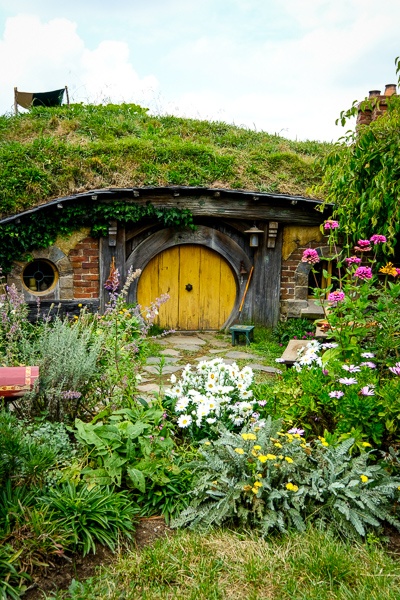 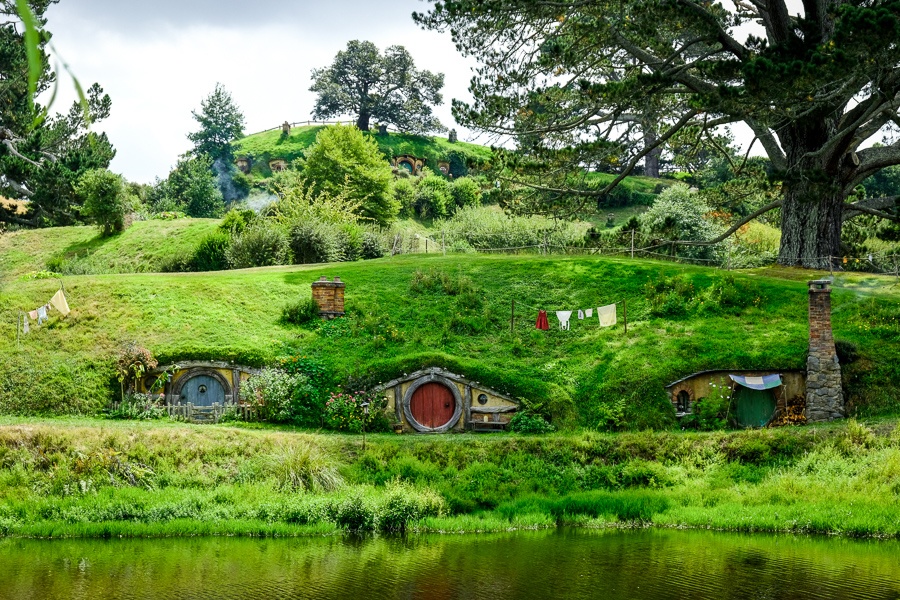 Despite the crowds, our tour guide was able to take photos of each of us by the hobbit holes, and also gave us plenty of time to take some of our own. And take photos we did! I think I snapped more than 200.

This movie set is incredibly cool and there are so many special little details in every corner. By the end, we were wishing we could live here in the Shire.

It’s a dangerous business, Frodo, going out your door. You step onto the road, and if you don’t keep your feet, there’s no knowing where you might be swept off to.

You can’t help but marvel at the amount of work and care that’s been put into this movie set! You can even open some of the hobbit holes and step inside, although the interiors are bare since that part was filmed at the studio in Wellington.

In total, this set has 44 hobbit homes, along with some other buildings from the series like a mill and the Green Dragon Inn, where everyone gets a free drink at the end of the tour.

The tour lasted about 2 hours in total, and this included a brief 10-15 minute bus ride between our meeting point and the movie set itself, and then back again.

We’re LOTR fans, but not exactly what you’d call fanatics. We enjoyed this place immensely! 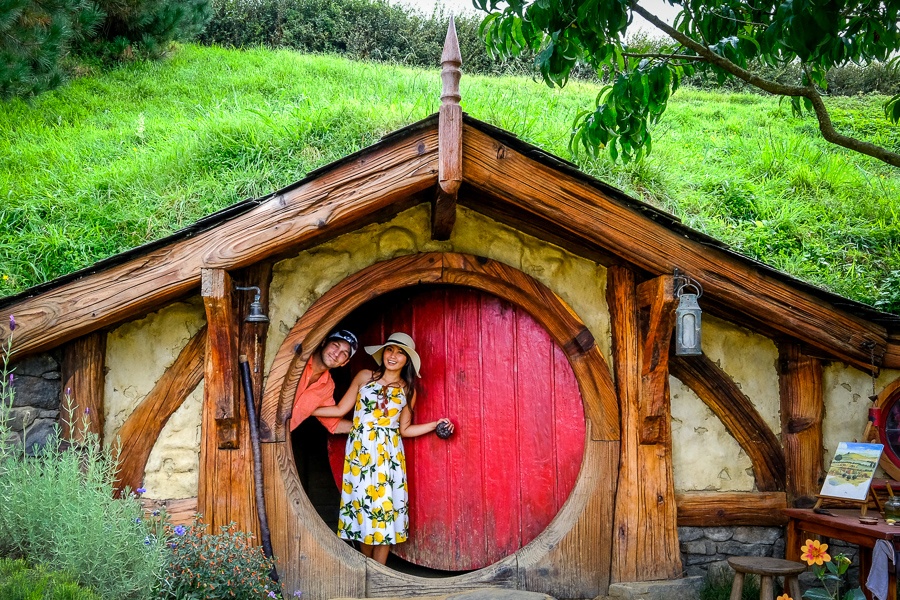 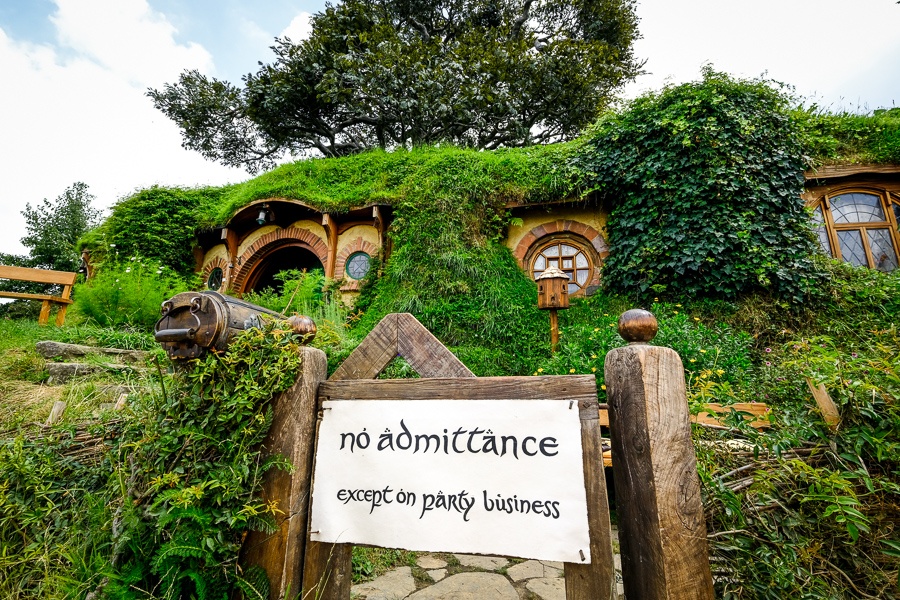 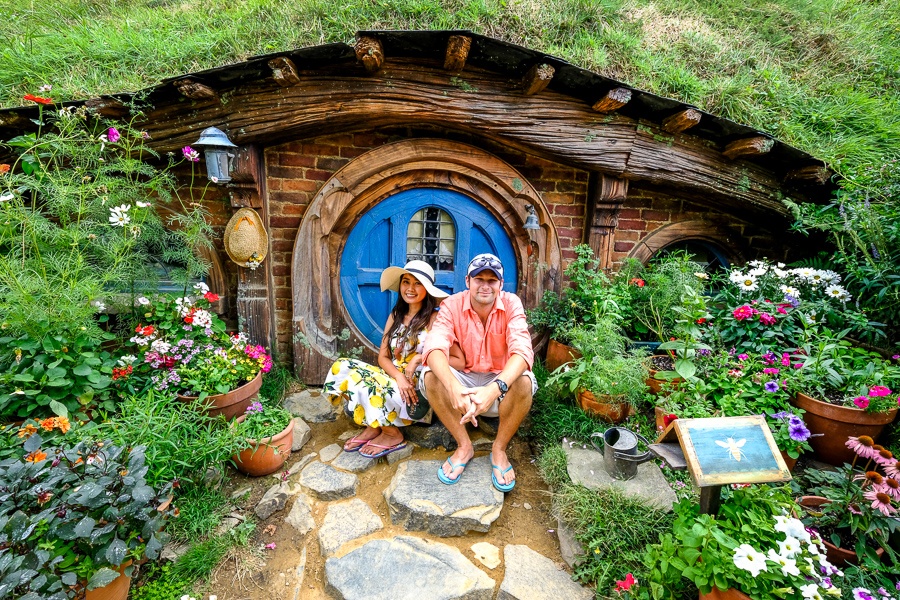 Honestly, this is one place where I don’t think there is any ‘best’ time to visit.

The North Island of New Zealand has a mild/comfortable climate all year round, and the Hobbiton movie set is photogenic at any time of the day. Even if you’re a photographer, you don’t need to worry about lighting.

We did our tour in the early afternoon, and I was worried this might be too late in the day, but as it turns out everything looked fantastic. I’m sure mornings and evenings are also very nice. 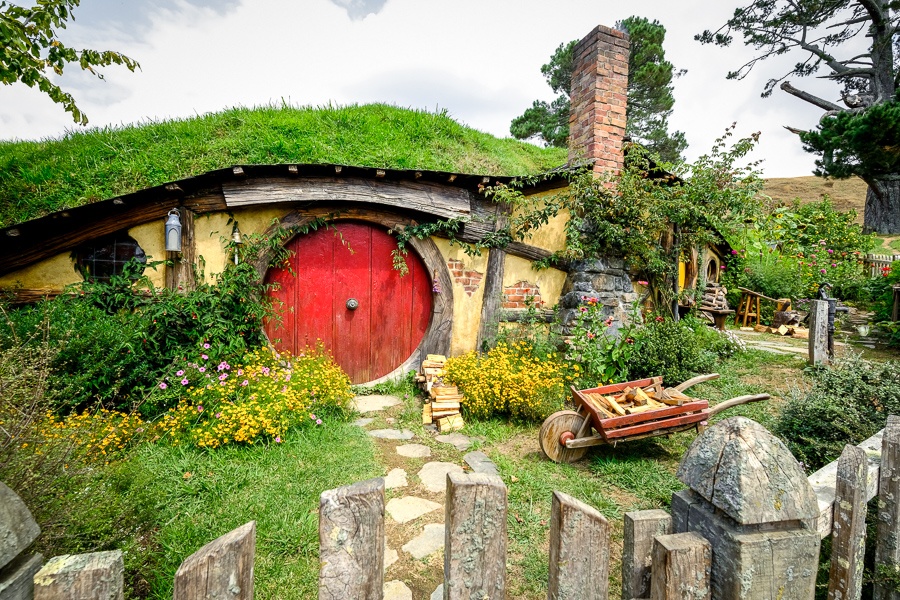 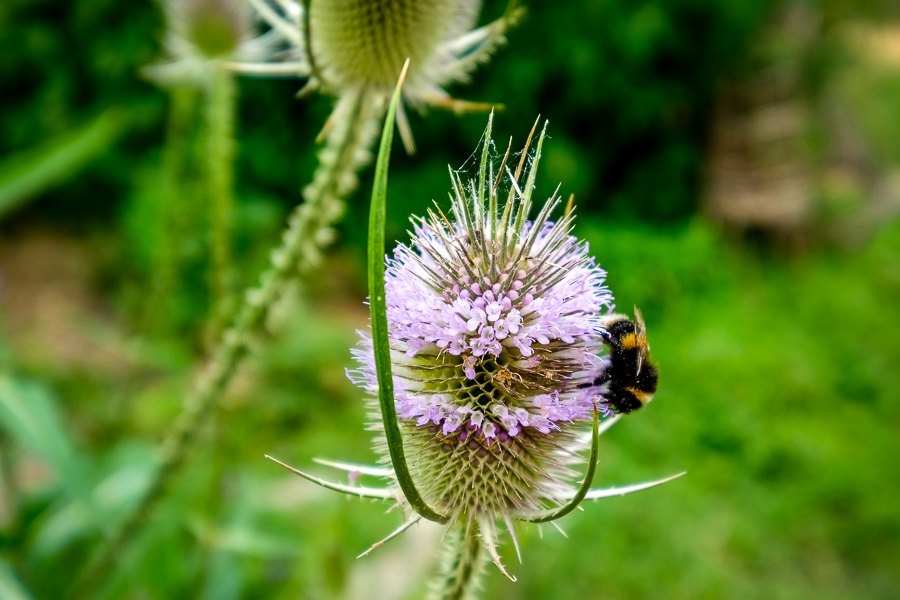 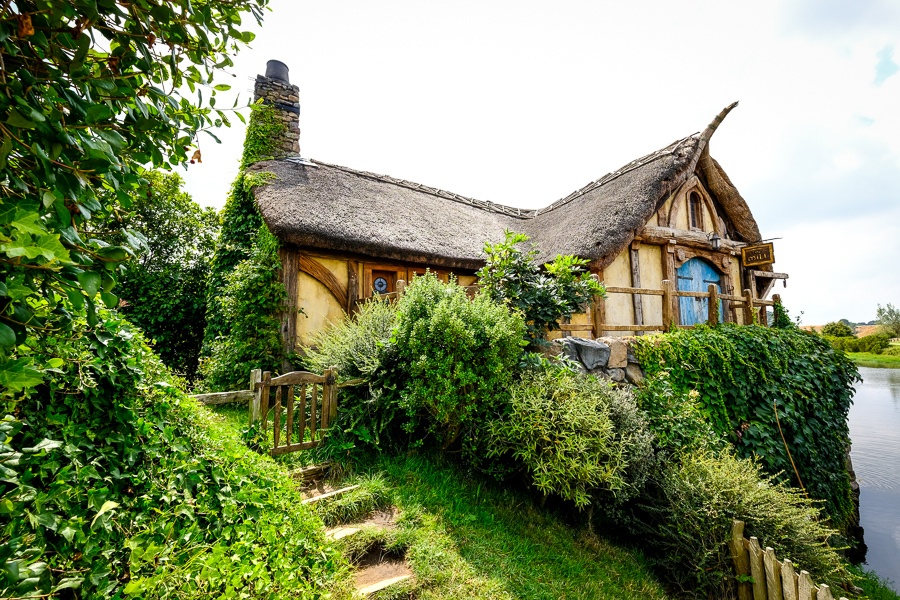 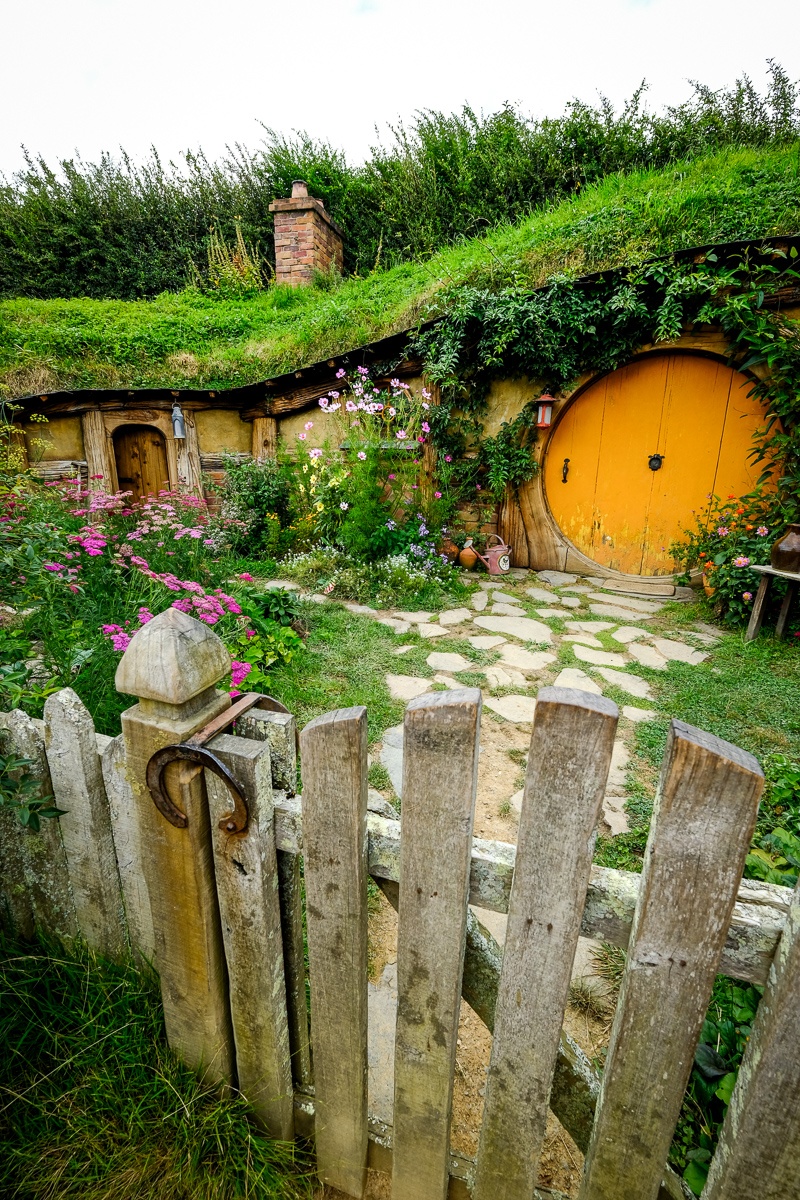 Most of our time in New Zealand was spent in a campervan, but for our last night on the North Island we stayed at this BNB style villa/homestay in Auckland for $55 USD ($87 NZD).

For this price we got a clean triple bedroom with cold A/C, extremely fast WiFi, a comfy living room area, and a shared bathroom/shower that were immaculate. Best of all, the location was just a 15 minute Uber drive to the airport for our early morning flight.

You won't find a better deal this close to the airport!