Buddha Point is a group of underwater Buddhist statues near Nusa Ceningan and Nusa Lembongan in Bali.

It’s a cool spot that can easily be visited from Lembongan or Nusa Penida.

The statues are only about 15-20 feet (5 m) deep and can easily be reached by snorkeling without any scuba gear.

There’s an 8 foot tall Buddha statue surrounded by some big bell-shaped stupas, similar to the ones at Borobudur Temple in central Java.

Take caution here though, because the currents can be strong. My boat man had to keep scooping me out of the water and dropping me back at the statues again, because I was quickly being carried away by the quick currents.

As long as you’re a good swimmer or have an attentive boat man, it should be OK. 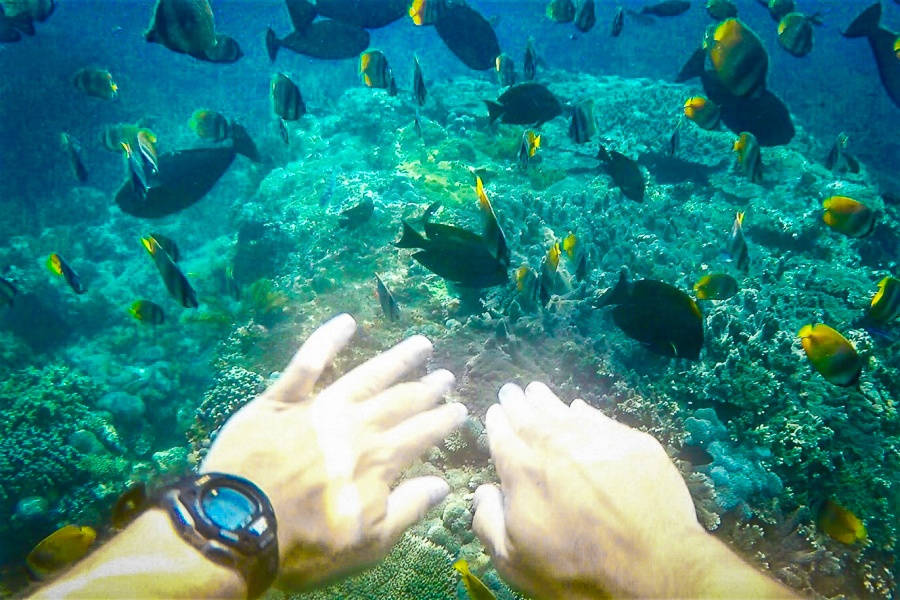 How To Get To Buddha Point

Buddha Point can be reached from Nusa Lembongan, Ceningan, or Penida.

The group of statues is located near the north end of Nusa Ceningan, not far from the mouth of the Ceningan Channel (the channel between Nusa Ceningan and Nusa Lembongan).

It can be reached by boat easily from Penida as well. I visited the statues along with several other coral spots on a half day snorkeling trip from Nusa Penida, for just 200k IDR ($14 USD).

As of 2019, there are some rumors going around from people (including locals) saying that these statues have been removed.

I spoke to my Balinese friend in Nusa Penida and he said the company that originally put the statues there as a snorkeling object didn’t like having a bunch of other companies bringing snorkelers to the same spot, so that’s why they’re trying to drive away other tours.

Apparently it’s a turf war created by this snorkeling company claiming ownership over the statues. According to my friend the same company has also removed the statues now, but hopefully this isn’t correct.

I’m still working on getting more info and may be able to visit Penida within the next couple weeks. If anyone has an more info please let me know and I’ll update this post.