The Mount Agung hike takes you to the top of the biggest and baddest volcano peak on the island of Bali, Indonesia, and the sunrise views are out of this world.

This brutal trek takes you up the steep slopes of an active volcano until you’re staring into the massive crater itself. I did the Mount Agung hike recently, and it was one of the most difficult and thrilling things I’ve ever experienced.

Sunrise trekking at the Mount Agung volcano is especially popular because you can catch amazing views of the sunrise from the top of the mountain, usually in a sea of orange clouds.

This travel blog will explain how you can hike Mount Agung, with or without a tour guide, and everything else you need to know before you go!

Where Is Mount Agung?

The Mount Agung volcano is located in Karangasem regency, in the northeast corner of Bali island.


About The Mount Agung Volcano

Mount Agung (also known as Gunung Agung in Indonesian) is the highest point in Bali, and at 3,142 meters it’s one of the top 100 prominent peaks on earth. My wife informs me that the name means ‘Great Mountain’.

Gunung Agung was long considered the ‘navel of the world’ by Balinese, and it’s still sacred in their beliefs. If you do this hike with a local guide, he’ll make a few stops along the way to burn Hindu incense and pray.

Balinese respect mountains as the dwelling place of the gods, and in old times you couldn’t climb Agung without a Hindu priest present.

Mount Agung is an active volcano that’s had some major eruptions throughout history. In 1963, a catastrophic eruption wiped out the nearby villages and killed 2,000 people.

The last Mount Agung eruption was in 2017-2019, when it exploded with a giant 4 kilometer tall ash cloud that caused mayhem in Bali. More than 100,000 locals in Karangasem were evacuated, and hundreds of tourist flights were canceled or diverted.

Nowadays, any signs of impending volcanic activity at Agung are constantly monitored by the Indonesian government, and if there are tremors sometimes the mountain is closed to hikers.

Obviously there is no guarantee of safety if you climb Agung. This is an active volcano, so there will always be some measure of risk involved.

However, it seems the catastrophic eruptions are usually spaced apart by several decades (after a long buildup of pressure), and most years don’t see any significant activity at all.

Personally I found the risk level acceptable, and I would love to climb Agung again sometime.

As of 2022, Mount Agung is currently at Level 1 alert status (‘normal’) according to the Indonesian government’s volcanological survey.

This is the lowest risk level, and it means the mountain is open for hiking once again! There are no legal barriers to climb the mountain now, but remember to double check on the alert status again before you go.

Here is a Mount Agung trekking tour package that you can book online. They offer the sunrise trek starting from either Pasar Agung Temple or Besakih Temple, although it’s more cost effective if you go with a friend (they charge a 2 pax minimum).

We’ve used Klook for lots of tours and activities around the world, and they’re great. Highly recommended!

Mount Agung Hike: What To Expect

Mount Agung sunrise tours start with a very early pickup (maybe 11 PM-ish) so your guide can drive you to the trailhead for a hike to the top of the volcano in time for sunrise.

This means you’ll be operating on very light sleep (if any at all), compounding the difficulty of the whole trek. Ever tried staying up all night while hiking for 8-12 hours on an extremely steep, rocky volcano in the dark? Chances are, probably not.

The Mount Batur sunrise hike is a good warmup for this one because the mechanics and terrain are similar, although Batur is much shorter and easier than Agung.

The Mount Agung trek can be broken down into 3 phases:

My wife, bless her heart, gave up shortly after we exited the treeline. She was too exhausted to keep going, the path was getting more sketchy, and the wind that day (late August) was terrible. We agreed to keep the guide with her for safety, and I pressed on to the summit alone in the dark.

The fact that my headlight was weak and I was running late for sunrise added some more urgency. I’ll never forget that moment: I was clinging to the side of a steep volcano, half asleep and beat to pieces, when the sky turned orange and I realized I was high above the clouds.

It was a really special moment.

Ahead, you have the huge smoking 900-meter-wide crater of Agung, and you get to look straight down into it from the crater rim. Watch your step, because there’s not much walking space at the top and people have fallen into the crater. You don’t want to be a sacrifice to the gods.

The views at the top are otherworldly. To the east and west, you can see the far off peaks of Mount Rinjani and Mount Abang, along with the giant Batur caldera in Kintamani. To the south, you can see all the way to Kuta.

The beauty of the Mount Agung hike is only outweighed by the difficulty and sense of achievement when you reach the summit.

The Mount Agung hike is very, very hard. It’s brutal. Mount Batur is a joke by comparison. The Agung hike is several times harder than Batur.

You don’t have to be an expert mountaineer to do this hike, but just being fit is not enough. You also have to be determined. Depending on which trail you take (see below), the hike can take up to 12 hours roundtrip, and you’ll gain up to 2,150 meters (7,000 feet) of elevation. That’s insane.

The last part of the hike is very steep, and in some places you’ll be climbing almost vertical in the dark. There were times when I seriously considered turning back, which is an unusual feeling for me.

For reference, I’ve done the Mount Everest Base Camp trek, Hawaii’s illegal Stairway To Heaven, and other famously difficult hikes, but this is still one of the hardest things I’ve ever done.

After the Mount Agung trek, we ate two meals each, collapsed at our hotel in Amed, and slept for 16 hours straight. We could barely walk for days.

There are two main routes for hiking Agung. One starts from the famous Besakih Temple, while the other starts from a smaller temple called Pura Pasar Agung:

Both routes are very difficult. The Pasar Agung route gives better views of the inside of the volcano crater, while the Besakih route ends on a tall ridge with great views of the whole landscape.

From the Pasar Agung trail it used to be possible to also reach the final summit using a side path that joins the Besakih trail partway up, but apparently this path was ruined in the 2017 eruption.

You could theoretically do the Mount Agung hike any month of the year, but this is already an intense hike and with rain coming down it would be 100 percent nightmarish and unsafe.

The best trekking months are definitely April to October, when there’s less chance of rain and the mountain visibility is best.

Just like at Mount Batur, there’s a local trekking group (mafia) that doesn’t let anyone climb the Agung volcano without paying for a local Balinese tour guide.

This time around, a guide definitely makes sense for both safety and navigation. There are several steep spots on the Mount Agung trek where you could be killed or seriously injured if you fall, especially in the dark. Having a guide to show you the easiest paths helps a lot.

I didn’t notice any ‘guards’ enforcing the guide rule when we went, but that was during the 2020 coronavirus pandemic when all the tourists were gone from Bali and things were quieter, so your experience may vary.

It seems a lot of Russian hikers try to climb Mount Agung without a guide, and they routinely injure themselves, go missing, or worse.

Using a local guide is just the smartest and safest thing to do in this situation.

If you’re resolved to hike Mount Agung without a tour guide, the first hurdle is finding the trailhead at night. You’ll need to follow the directions below carefully.

Park your vehicle at Pura Pasar Agung and start walking up the concrete steps until you see the main gate of the temple. It’s the pointy Balinese gate shown earlier in this guide.

When you reach the gate don’t go inside, but instead turn left and walk around the outside of the temple. Go down a small flight of stairs, and then straight across the flat concrete foundation near the side of the temple.

At the edge of the trees, you’ll see a small path leading into the jungle. Follow this path and keep going up, up, up the slope until you emerge from the treeline hours later near the mountain top.

When you get above the treeline, the path becomes harder to follow. Some of the boulders are marked with white spray paint arrows and Indonesian words, but these are almost impossible to see in the dark.

The best advice I can give for the scrambling section is to take a right turn any time you encounter a fork in the path. To reach the crater rim, you’ll have to cross a trough by climbing up the rocks on the right side.

Again, I would strongly advise against hiking Mount Agung without a guide. 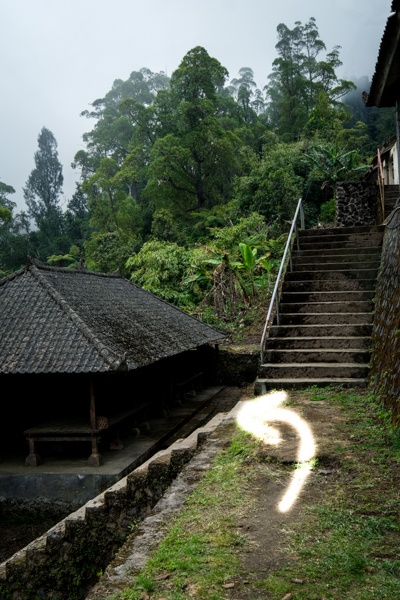 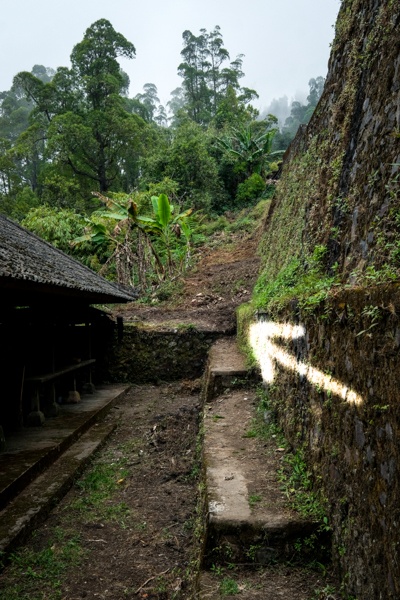 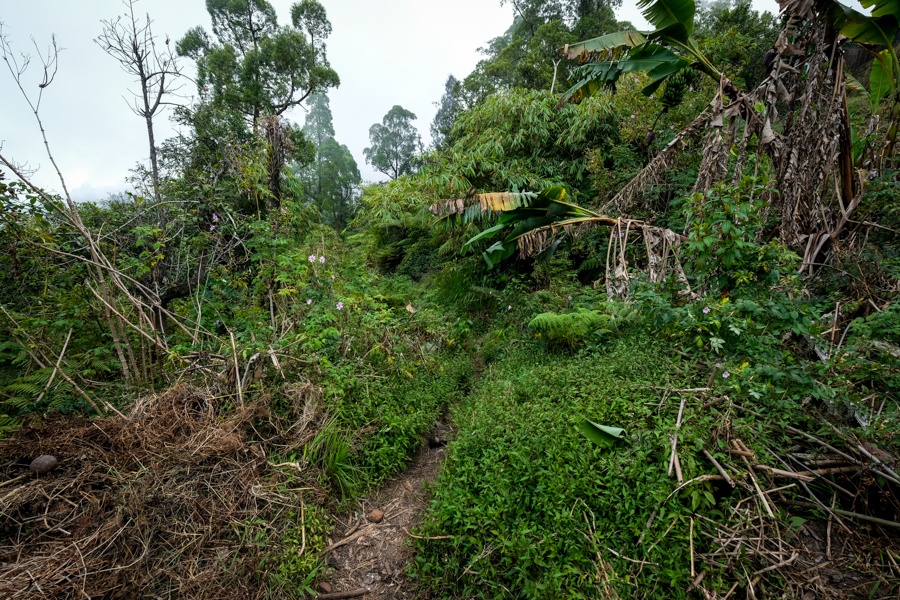 There aren’t really any homestays near the Mount Agung trailhead, so you’ll have to base yourself elsewhere in Bali.

The closest place to base yourself is Sidemen, Candidasa, Amed, or Kintamani. Of course, you can also do this hike from the touristy areas like Ubud or Kuta, but there’s a bit longer drive in each direction.

Personally I’m a big fan of Amed, because it’s also a chill place to relax after the hike and you get awesome views of the Agung volcano from the beach.

Thanks for looking! I hope you enjoyed this Mount Agung trekking guide.

Don’t forget to check out my Bali Travel Guide and my complete list of the best hikes in Indonesia!