The ‘Stairway To Heaven’ Hawaii hike is epic, dangerous, and illegal. Still interested? This trail in Oahu, also known as the Haiku Stairs, takes you to the top of the Ko’olau mountains via 3,922 metal stairs of pure adrenaline and doom.

At some points, the stairs are almost vertical, clinging to the side of the steep mountain. I first discovered the ‘Stairway To Heaven’ Oahu hike on the internet in 2015 and knew I had to try it. Not only are the views out of this world, but the whole experience is just indescribably awesome and unique.

I’ve done the Hawaii ‘Haiku Stairs’ hike twice now, and even after traveling in dozens of countries, it’s still my favorite trek in the world. It may never be topped!

This travel guide will explain all about how you can do the Hawaii ‘Stairway To Heaven’ hike, complete with trailhead directions, map, and everything else you need to know before you go!

Contents hide
1) Stairway To Heaven Hawaii Hike
2) Quick Facts
3) What Is It? History Of The Haiku Stairs
4) Is It Illegal To Climb?
5) Where Is It?
6) How To Get There – Entrance/Directions
7) What Else To Expect
8) Is It Safe?
9) What To Bring
10) The Back Way – Moanalua Valley Trail
11) Future Of The Haiku Stairs – Open/Closed?
12) You Might Also Enjoy

What Is It? History Of The Haiku Stairs

The Oahu ‘Stairway To Heaven’ was built by the US Navy in 1942, along with a radio station and giant antenna at the top of the mountain that were used to communicate with ships in the Pacific during World War II.

The ‘Haiku Stairs’ Hawaii trail was officially closed in the 1980s, and it’s been damaged a little (and repaired) on and off in the years since then. The stairs are hiked by dozens of people every day, but the status of the trail is still in limbo because the state of Hawaii can’t decide what to do with it.

Is It Illegal To Climb?

Technically, yes it is illegal to climb the Oahu Haiku Stairs. The state of Hawaii has an annoying habit of closing any hike they consider slightly dangerous (Puu Manamana and Sacred Falls are other examples).

Personally I think people should be allowed to decide for themselves what kind of risks they’re comfortable with. The ‘Haiku Stairs’ Hawaii hike is not especially dangerous. More on that later.

Just be aware that fines of up to $1,000 have occasionally been given out to people caught climbing the stairs. The trailhead area below the stairs is patrolled by a security guard around the clock, and sometimes the Honolulu police are called.

There’s also the potential for a criminal charge of second degree trespassing (a misdemeanor record), which could be a big problem for some people who have security clearances, sensitive employment, professional licenses, immigration applications, etc.

Both times I did the hike, the security guard yelled at us from a distance but didn’t seem to chase after us or call the police. We hit the stairs and then disappeared into the jungle before we could find out.

The Stairway To Heaven trail is located on the Hawaiian island of Oahu.

The stairs start in the Haiku Valley, under the H3 highway (John A. Burns Freeway) and they wind up the side of a mountain near Kaneohe, called Puʻukeahiakahoe.

However, the whole Haiku valley is blocked off by a residential area with fences, yappy dogs, and a security guard, with only a few possible entrances (more on that below).

How To Get There – Entrance/Directions

The best mode of transport for getting to the Stairway To Heaven trail is an Uber or the bus. I don’t know of any public parking in the Kaneohe area.

Hop off in the general area of Kuneki Street or Puoni Place, depending on which entrance you plan to use for the ‘Stairway To Heaven’ Oahu hike.

The map below shows 3 entrance points for reaching the stairs: 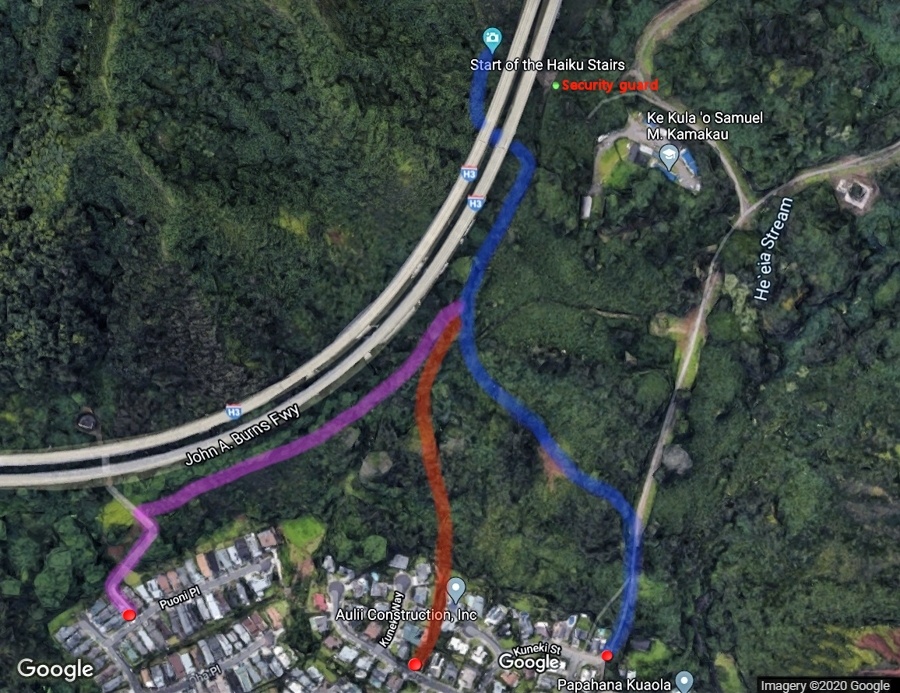 Keep in mind this map is approximate and NOT 100% true to life. I don’t have the exact paths memorized, but if you follow these general directions you should be good.


What Else To Expect

The ‘Haiku Stairs’ Hawaii hike is steep and strenuous, but the only hard part is the first 1/3rd of the stairway leading up to platform one. After you reach the first platform, the hike flattens out quite a bit and things get much easier.

At this point, it becomes a ridge walk as you keep gradually ascending to the radio tower, and even on a cloudy day the views are spectacular. You can see the windward side of Oahu island with Kaneohe Bay’s sandbars, and an amphitheater of mountains surrounding you on all sides.

When I did the ‘Haiku Stairs’ Oahu trek for the first time on my birthday in 2016, the weather started out clear but then some clouds came in. It gave the mountains and everything a surreal touch that made us feel like we were walking up into the heavens.

There’s something really special about this hike, and I still consider it one of the highlights of my life. I hope to do it again someday. In my opinion, it is well worth any of the risks involved! 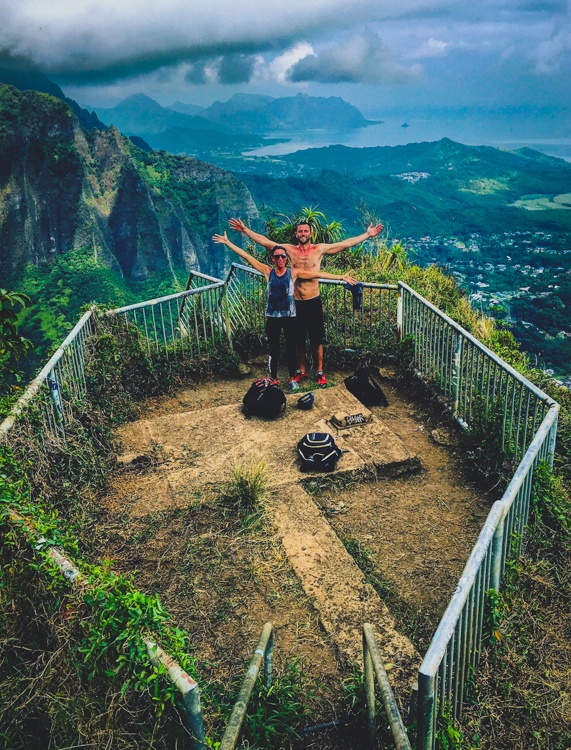 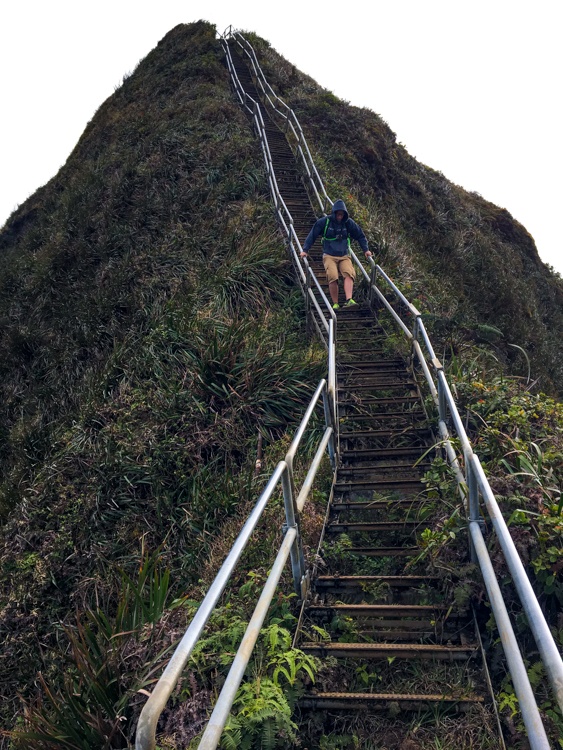 The Stairway To Heaven trail is scary, but not dangerous IMO unless you do something dumb. I wouldn’t recommend this trek if you have a big fear of heights, but most people will agree it’s not near as bad as they expected.

There haven’t really been any known deaths on this hike. Any deaths I’m aware of were caused by heart attacks in middle aged hikers (that steep ascent to platform one can be a huge workout).

There is one section of stairs that was mangled in a storm, but the damage is pretty minimal and you can pass it without any trouble. To stay safe, just wear shoes with good grip and remember to keep 3 points of contact at all times.

The Back Way – Moanalua Valley Trail

If you want to see this place legally with no chance of fines, you can hike up the Moanalua Valley Trail on the back side of the same mountain.

This hike takes you up a dirt path with no stairs, but you can still reach the Hawaii ‘Stairway To Heaven’ trail at the top and go back down in either direction when you’re done.

Keep in mind, to stay 100% legal you will have to go back the same way you came. If you hike up the Moanalua trail and then down the stairs, you’re still risking a fine.

The Moanalua trail can be muddy after rain, so check the conditions before you go. The general consensus is that the stairs are actually a safer route. The only reason to take the back route is to stay legal and rule out any possible fines.

Future Of The Haiku Stairs – Open/Closed?

The Honolulu Board of Water Supply owns the Hawaii Haiku Stairs, and they’ve repeatedly talked about the idea of tearing them down for safety or legal reasons. I really hope they don’t do that.

This trail is a national and state treasure, with amazing scenery and a cool bit of history behind it. I think it should be repaired and preserved for people to enjoy forever.

UPDATE 08/2020: Great news — looks like the ‘Stairway To Heaven’ Hawaii trail will be saved after all! Ownership of the stairs has been given to the city of Honolulu, and supposedly they’re planning to turn the Haiku Stairs hike into a paid attraction. We’ll keep this space updated.

My wife and I are usually traveling in Bali, but my journeys take me to destinations all over the world.

Endless lagoons of Sombori Island. See our boat on