The Padar Island hike in Komodo has some of the most amazing views in Indonesia, and it’s easy to do on a day trip from the town of Labuan Bajo.

This place looks just like dinosaur country, with rocky hills and giant bays and beaches that stretch out in all directions.

A tour of the Komodo islands wouldn’t be complete without doing this trek! You can visit Padar Island on a day tour, or you can spend a few days on a liveaboard boat seeing lots of islands.

The north side of Padar Island even has a pink beach with unique reddish sand that’s become another famous sight for tours in the Komodo National Park.

This travel guide will explain how to get to Padar Island Indonesia, and everything you need to know before you go! 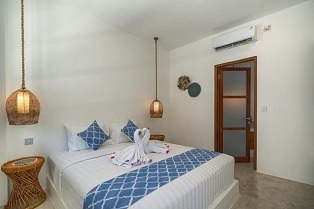 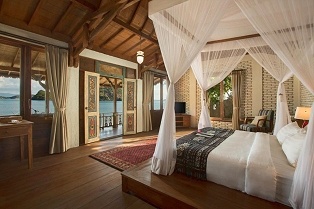 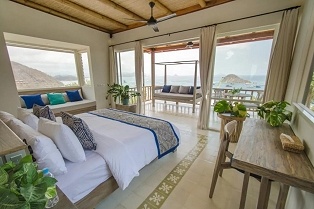 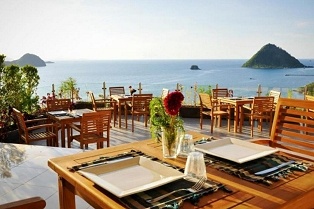 
Where Is Padar Island?

Padar Island is located in the Komodo National Park, a group of islands in east Indonesia.

The closest city is the fishing town of Labuan Bajo on Flores island, which has its own airport and plenty of hotels and restaurants to enjoy in between visits to the park. 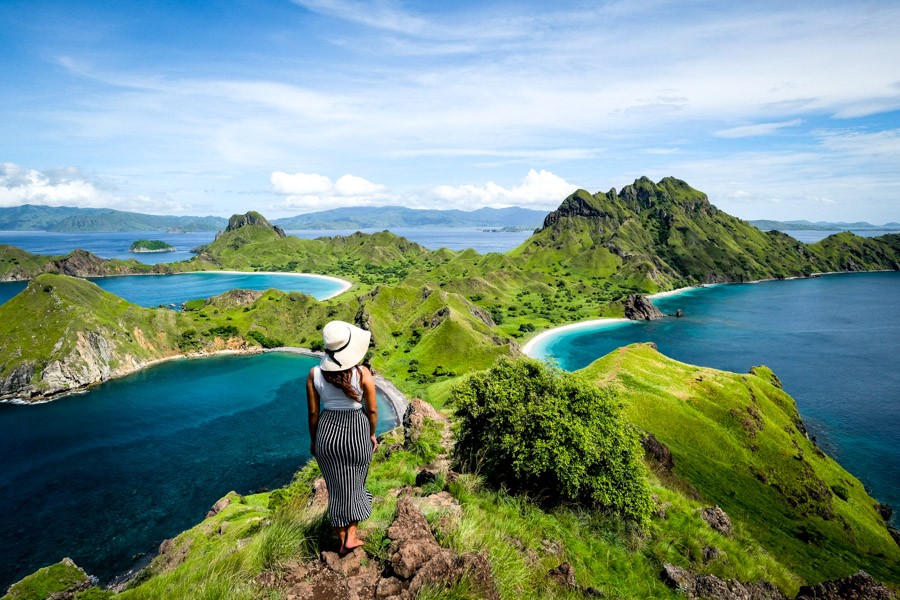 How To Get To Padar Island

The only way to get to Padar Island is on a boat trip from Labuan Bajo.

It’s about 40 kilometers (25 miles) from Labuan Bajo as the crow flies, and the journey normally takes 3 hours with a slow boat, or less than half that long with a speedboat.

You can knock out most of the top sights of Komodo National Park (including Padar) in one full day trip, or it’s possible to stay in a liveaboard boat and spend several days sightseeing!

There are a bunch of flights to Labuan Bajo airport (LBJ) every day from Bali, with a 1 hour flight time and several airlines offering ticket prices as low as $40 USD.

Getting to the Komodo islands from Bali is easier than ever now that AirAsia flies between them several times per week. You can also fly to the Labuan Bajo airport from Jakarta, Surabaya, or Ende. You can shop for flights to Labuan Bajo at Skyscanner.

Once you get to Labuan Bajo, it’s possible to book a boat tour to Padar Island at the harbor, or you can book a tour online (more on that later). 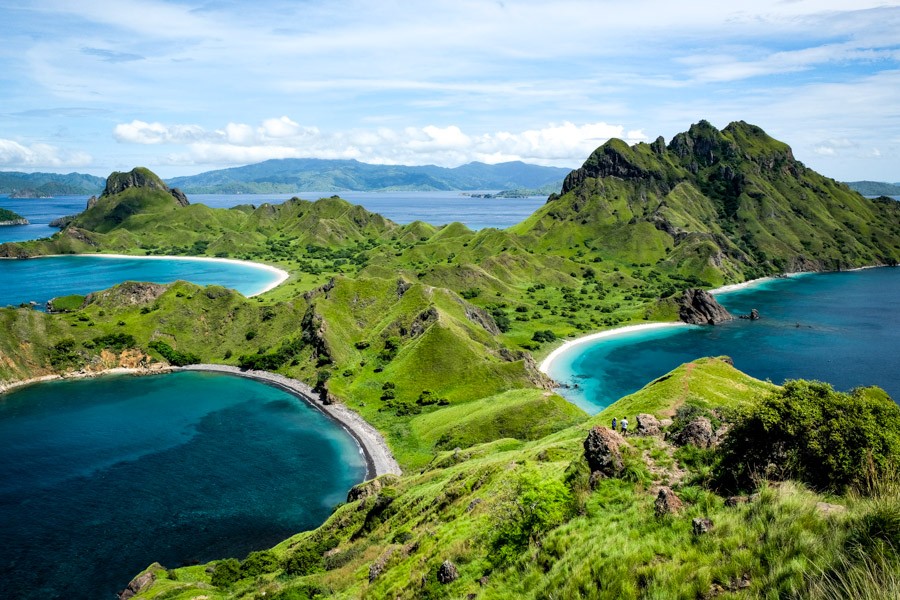 The hike to the top of Padar Island only takes about 20-40 minutes depending on your pace.

There’s a cobblestone path all the way to the top now, but it’s still a pretty steep and exhausting climb. Along the way, there are some viewpoints where you can stop to rest as you work your way to the top for the best view.

The Padar Island hike has very little shade and the sun in Komodo is pretty brutal, so plan on getting roasted on your way up the hill!

You’ll want to bring some water plus a hat and sunscreen, especially if you hike later in the day. Mornings are best. 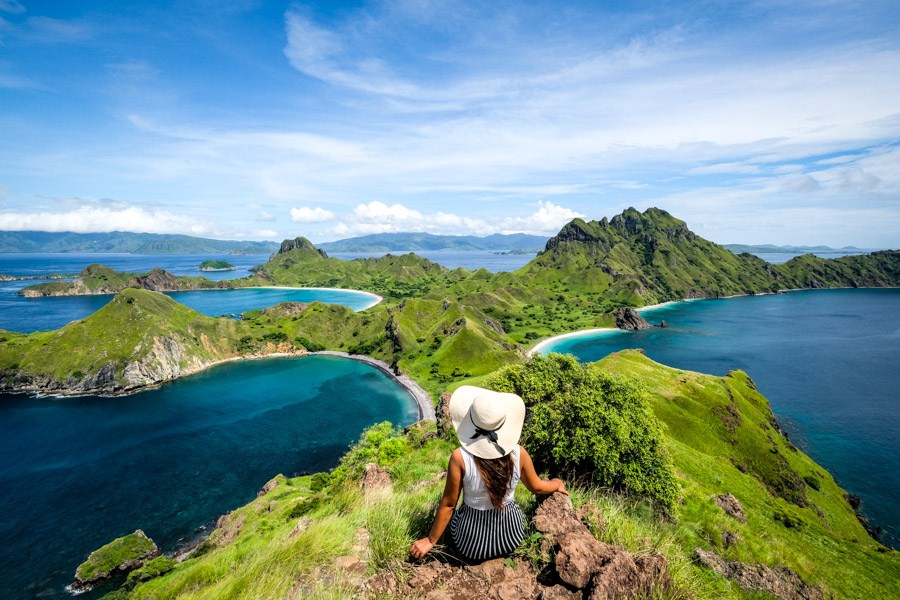 Nowadays, park rangers are posted at intervals along the path to keep people safe. They’re friendly, but kind of clingy.

Maybe it’s because we were the only visitors at the time, but they kept trying to give us a hand with everything and smothered us with cautions to the point where it was a bit annoying. We didn’t really feel free to roam and take pictures.

This is Indonesia, we don’t want to be babysat on such a simple hike! Just let us take some photos and enjoy the view! 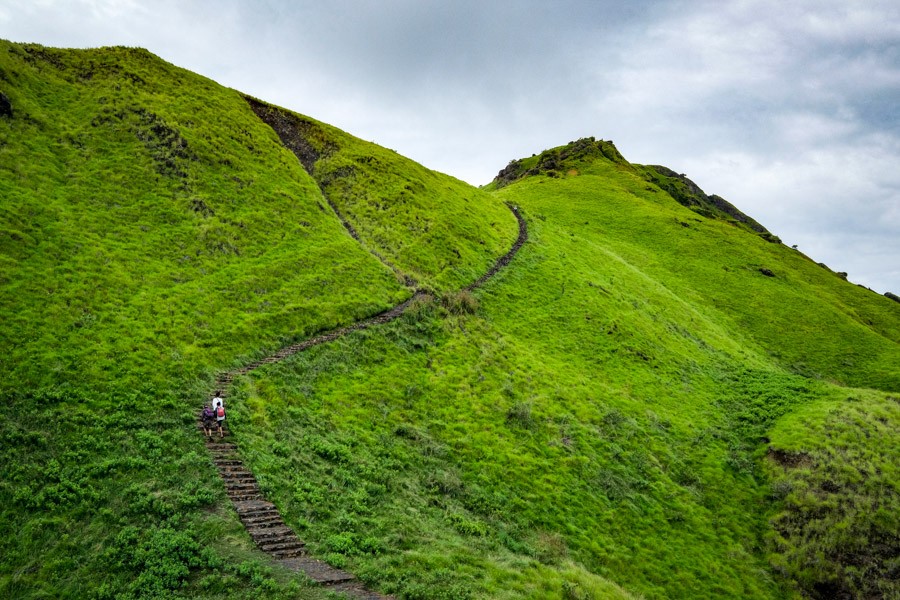 The top viewpoint at Padar Island is incredible. The landscape really does look like a Jurassic Park set.

Even though Padar is one of the smallest islands in the Komodo National Park, this scenic viewpoint has become a famous natural landmark of Indonesia, even being featured on the 50,000 Rupiah cash note.

The island looks like it has a giant X shape, with three bays where you can see a white beach, black beach, and pink beach.

Each of those sand colors is pretty special in itself, but to see all of them in one place is crazy. This is probably the only place in the world where you can witness that!

In the distance you can see Komodo Island, home of the famous Komodo dragons (Padar has wild dragons too, but they stay on the north side of the island so you probably won’t see them here). 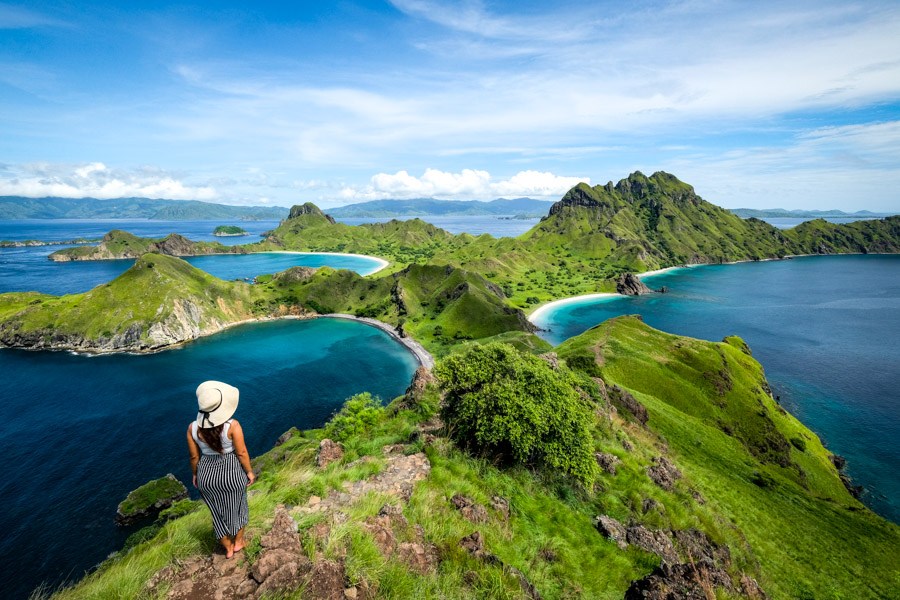 Is Padar Open Or Closed?

In August 2022, tourism activities in the Komodo National Park were temporarily stopped for two days because of strikes related to the Indonesian government trying to dramatically increase the park entrance fees.

You can read more about this in my full Komodo travel guide. However, thankfully, the Indonesian government relented and decided not to raise the park fees at this time, so everything is back to business as usual.

The Komodo islands (including Padar) are officially open for tourism!

The Komodo National Park has a confusing ticket system with a bunch of different entrance fees that you pay in a small booth at Padar.

When you total everything up, you can expect to pay up to 500k Rupiah ($37 USD) per person for a 1 day park pass that allows you to do the Padar Island hike and the other highlights in Komodo, Indonesia.

This ticket price is current as of 2023, but it seems to go up every year. I think the price is still worth it for the outstanding nature you get to see at Komodo. 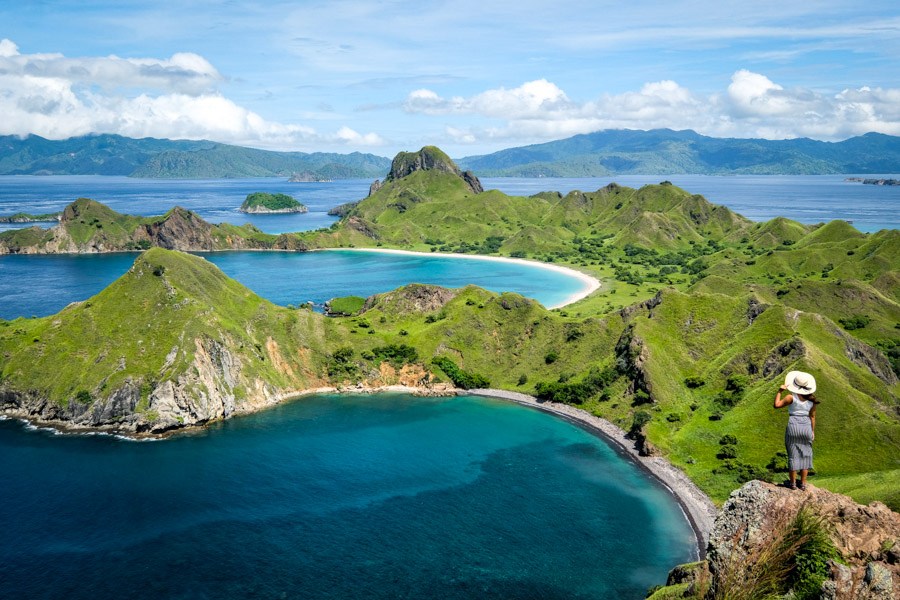 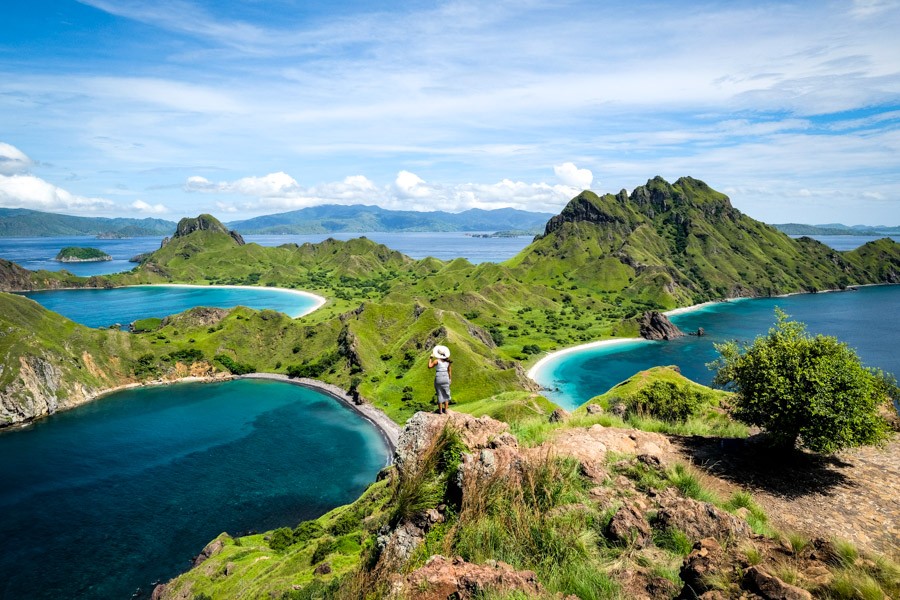 As of 2021, the Komodo park rangers don’t let anyone fly a drone at Padar Island anymore unless you pay an exorbitant 1 million Rupiah ($70 USD).

I guess some limits are understandable since the viewpoint gets crowded, and I’m sure they have lots of people wanting to fly drones there every day, so they have to control it a little bit.

If you’re feeling creative, you can still get drone shots of Padar without paying if you launch from one of the many hidden bays or islands nearby where the rangers can’t see you. I may or may not know a guy who did that. 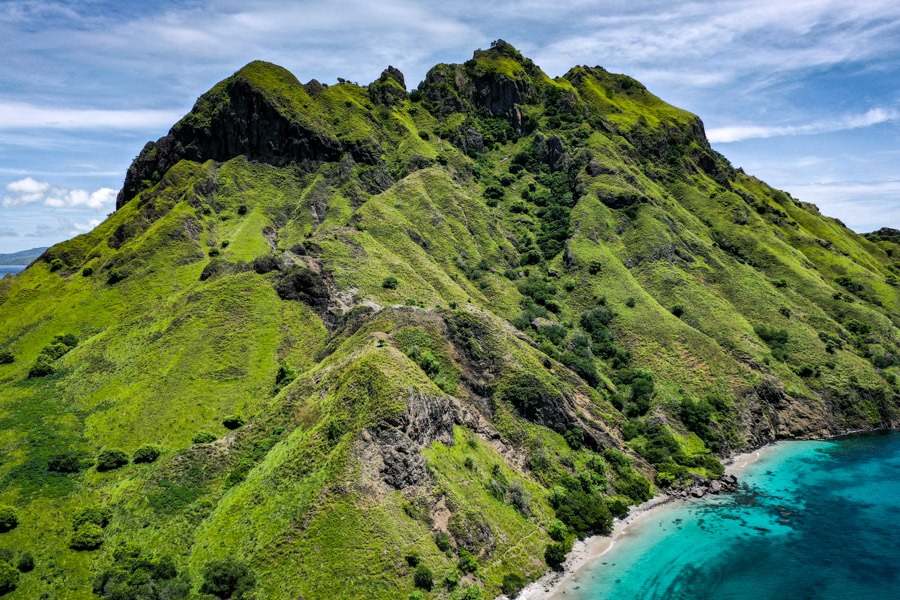 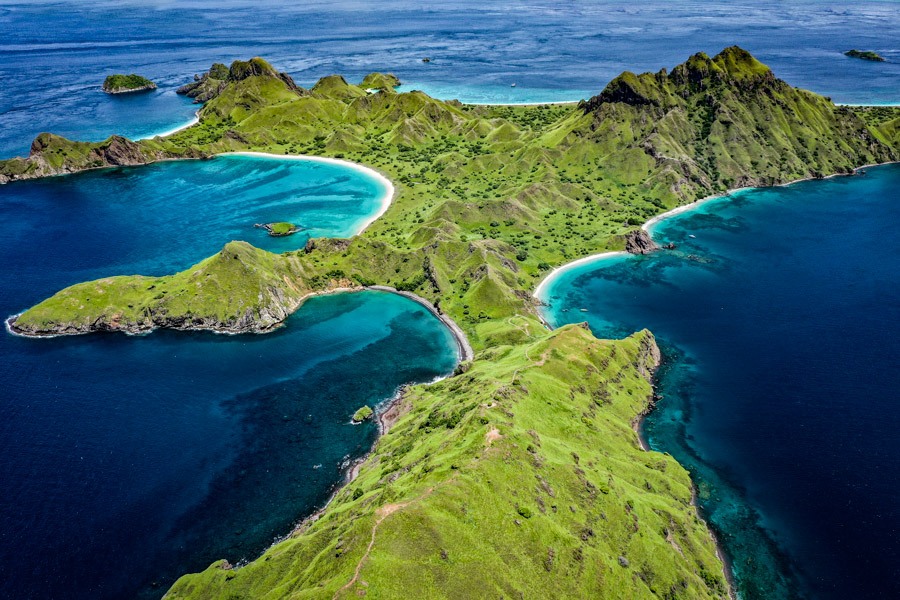 Are There Komodo Dragons On Padar Island?

There are also some venomous snakes like the Island Pit Viper (Trimeresurus Insularis), although they usually hide in the trees during the daytime and come out at night to hunt.

We’ve occasionally seen Javan Rusa (deer) scampering around on Padar Island, but overall there’s not a whole lot of sizable prey for the dragons here. It’s a small island with a very dry climate, so the giant lizards prefer to stay on Komodo instead.

According to the local trekking guides, the few Komodo dragons in Padar Island tend to stay on the north side of the island, so you probably won’t see them while you’re hiking to the viewpoint.

The best time to visit Padar Island really depends on what you’re looking for.

High season for Komodo National Park is July to August, when the weather is cooler and more comfortable, but the park is also more crowded. The climate in the Komodo islands tends to be drier and more sunny than other places in Indonesia, like Bali.

The main months to avoid for the Komodo islands are December to February, when Indonesia has its rainy season and the weather is not very good for sailing or trekking. Generally the only reason to go in these months would be to avoid the crowds.

The grass color changes with the seasons. It’s green in the tail end of the rainy season (January to April). By April or May, the grass color starts to turn yellow. In the summer and fall (July to November), the islands are bone dry and the grass is all brown.

Most boat tours go to Padar in the morning, when the temps are cooler for hiking and the landscape has a nice dramatic lighting.

Because of the panoramic viewpoint at the top of the Padar Island hike, it can be great for either sunrise and sunset! 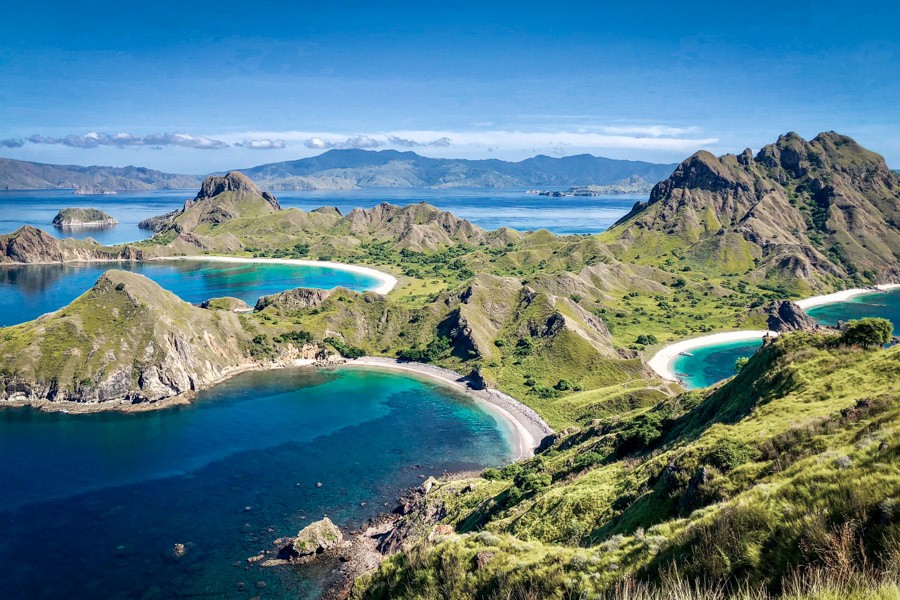 There are actually two pink beaches on Padar Island, and one of them is visible from the viewpoint, but the best one (with the reddest sand) is hidden in a bay on the north side of the island.

This unique beach is another must see when you’re visiting Komodo National Park, and most tours include it. 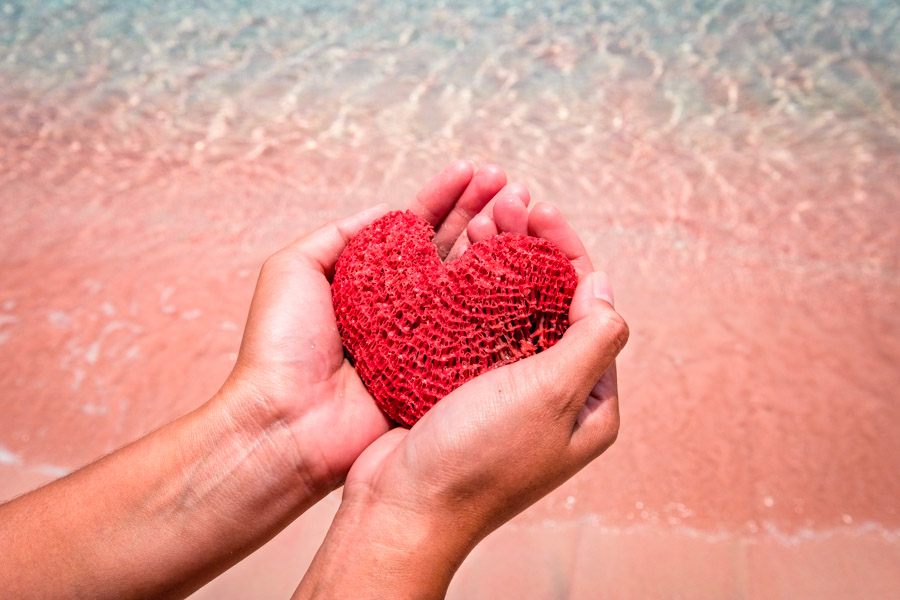 This tour includes the top sights in Komodo like Padar Island, Pink Beach, and the Komodo Dragon safari, and their prices are very competitive based on what we’ve seen being quoted for similar tours in Labuan Bajo. The online reviews are positive too.

Is There Padar Island Hotel Accommodation?

No, at the moment there isn’t any hotel or accommodation on Padar Island.

That may change someday, but for now this island is completely undeveloped and wild, which I think is a great thing.

Most people visiting Padar (and the Komodo National Park) stay in the nearby town of Labuan Bajo, on Flores island.

There are lots of great hotels and accommodation in Labuan Bajo. You can find some of our recommendations below!

Thanks for looking! I hope you enjoyed these tips for touring Padar Island Indonesia on a day trip from Labuan Bajo. It’s one of the best viewpoints Southeast Asia has to offer!

Don’t forget to check out my complete Komodo Travel Guide for more information about seeing the dragons and other islands! 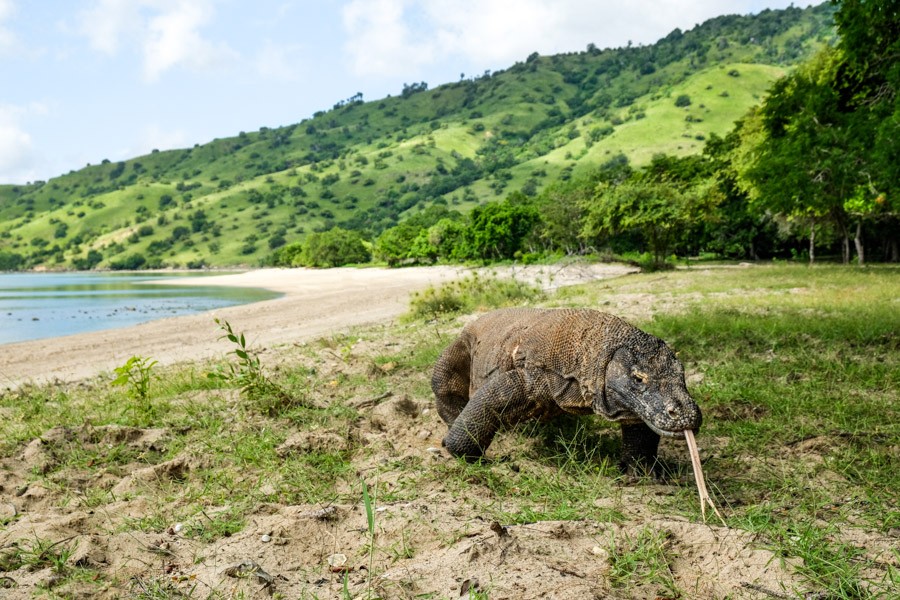 Don’t forget to check out my complete Komodo Travel Guide!

Thank you for the guides!
Can’t wait to explore.