Iceland waterfalls are insanely beautiful, and that’s why this country has become famous for having some of the best falls in the world.

The terrain is a perfect combination of rugged mountains and melting glaciers in the summer, so there are over 10,000 waterfalls here!

I visited the country for a full month in 2016, and this is a list of some of the best waterfalls in Iceland, complete with an Iceland waterfalls map!

This list is ordered chronologically, assuming you drive the Ring Road in a counter clockwise direction, starting with the southern waterfalls first and then going in a full circle around the entire island, including a stop in the more remote Westfjords and Snaefellsnes Peninsula, until you end up back in western Iceland near Reykjavik.

This is what I did on my trip to Iceland, and the driving was a bit exhausting, but the sights along the way were totally worth it! All of the waterfalls on this list are reachable with a normal 2WD car and/or a bit of hiking.

Here’s an Iceland waterfalls map you can use to plan your trip. You can click the icons to get more info and directions for each point of interest, but keep in mind some of the locations on this map may be approximate.

For more detailed information on how to get to each of the Iceland waterfalls on this map, you can check out my individual travel guides for each location.

Seljalandsfoss is one of the first waterfalls you’ll see if you drive south on the Ring Road from Reykjavik. It’s also one of the most popular and photogenic waterfalls in Iceland.

When you’re done admiring the falls from the front, you can walk behind the waterfall for another perspective. Careful with your electronics near the falls, because there’s a lot of mist! 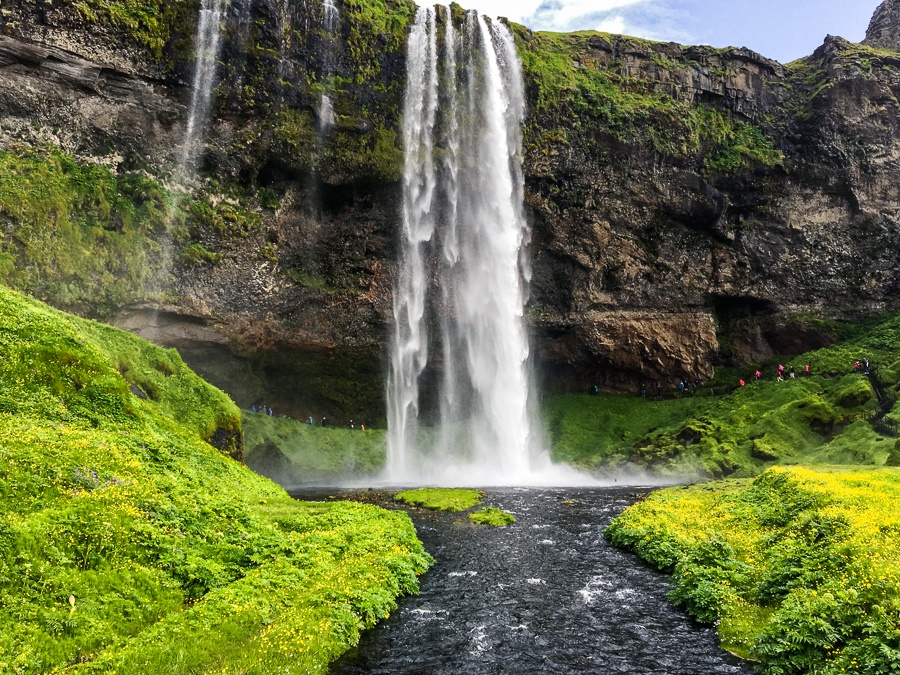 Gljufrabui is a neat hidden waterfall that you can reach on a short 5 minute walk from Seljalandsfoss.

The falls are hidden inside of a cave, but you can get a closer look by either walking through the opening of the cave OR climbing up above it and peering through an opening in the ceiling of the cave. 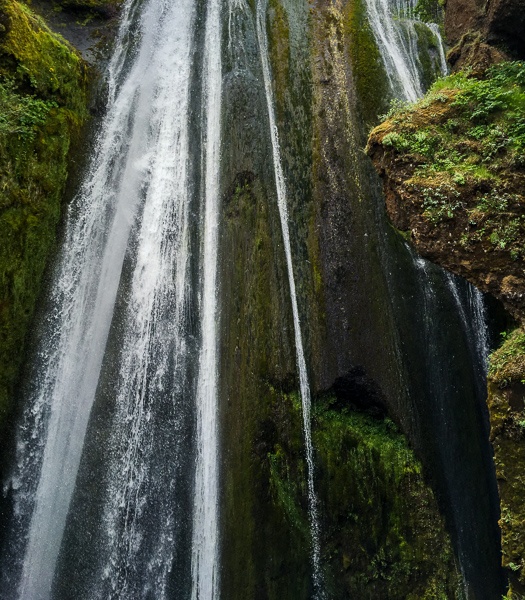 It’s almost impossible to take a bad photo of Skogafoss. Everything about it is perfect, from the black volcanic sand on the shore, to the solid sheet of water raining down between green cliffs that look like they came from a fantasy movie.

The size of Skogafoss is impressive too. It’s about 60 meters tall and 25 meters wide, making it one of the taller waterfalls in Iceland. 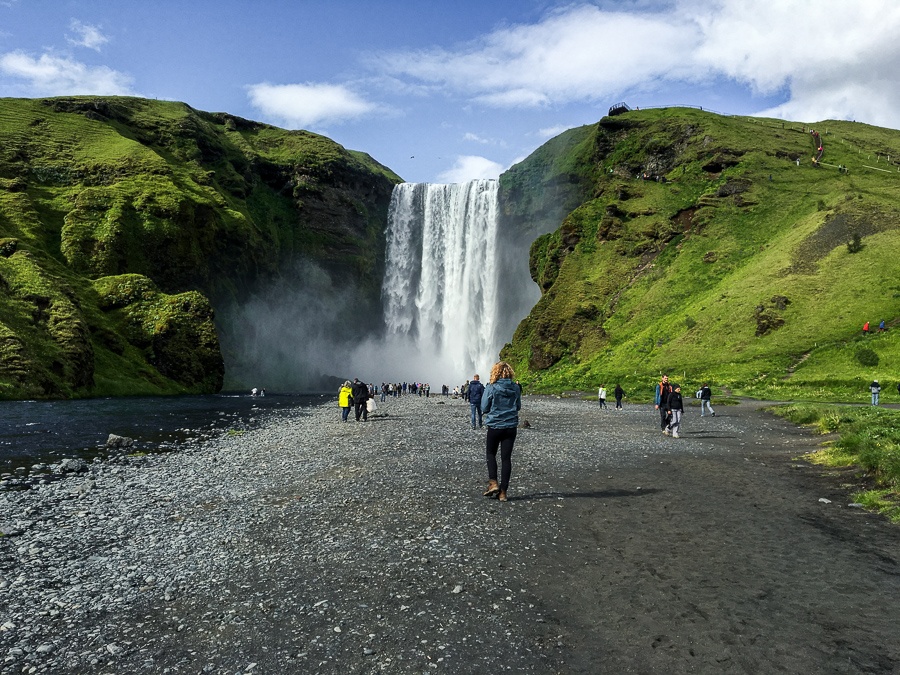 This is a less known 30 meter (100 foot) tall waterfall near Skogafoss, but it’s easily one of the best waterfalls in Iceland.

The short hike from Skogar to Kvernufoss is a scenic walking path through an incredible green canyon that looks like something out of Lord of the Rings. The hike to the falls is worth it just for the surroundings alone! 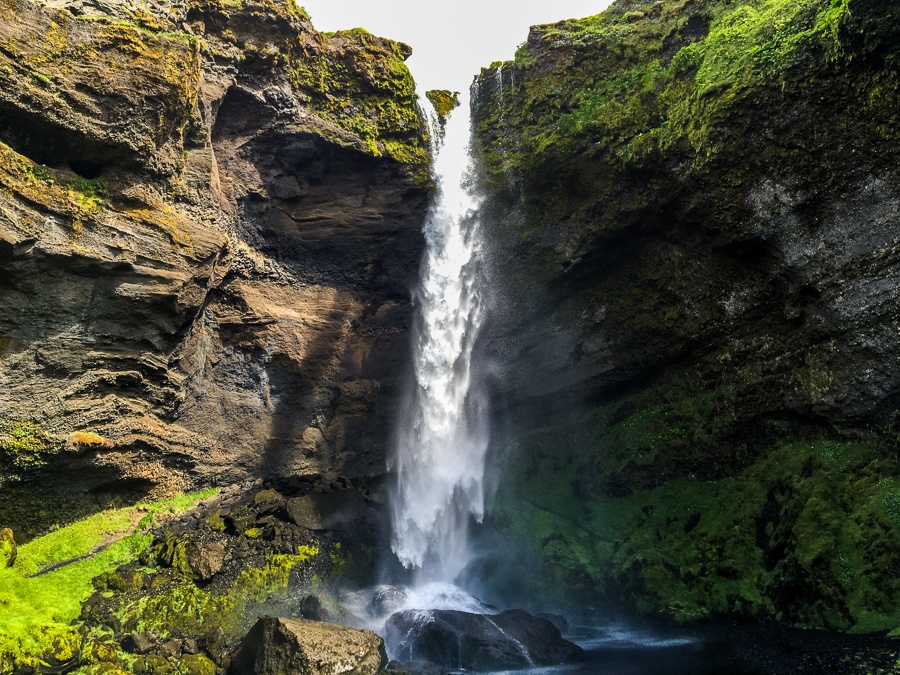 This is one of the most unique waterfalls in Iceland. The name Svartifoss means ‘black falls’ and it comes from the dark lava basalt columns surrounding the waterfall. It may look small in photos, but it’s actually about 20 meters tall! 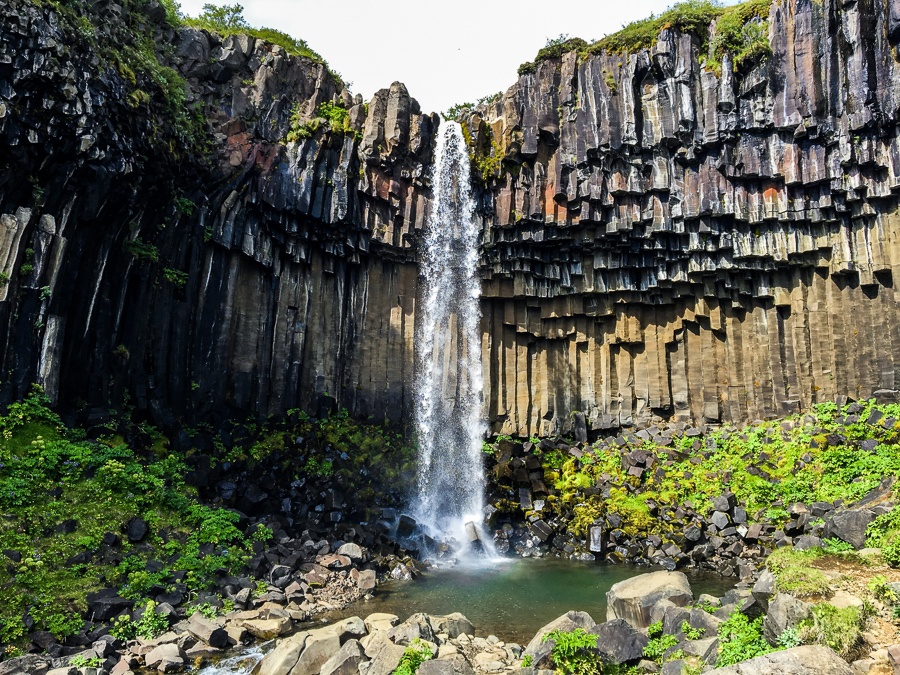 Hengifoss has to be one of the most incredible waterfalls in Iceland, although it does have some tough competition from Dynjandi and Haifoss. This waterfall looks like something from Mars. The big lines of red clay sandwiched between the rock layers give it such a bizarre, unbelievable look. It’s also the 2nd tallest waterfall in Iceland, at 130 meters (420 feet). 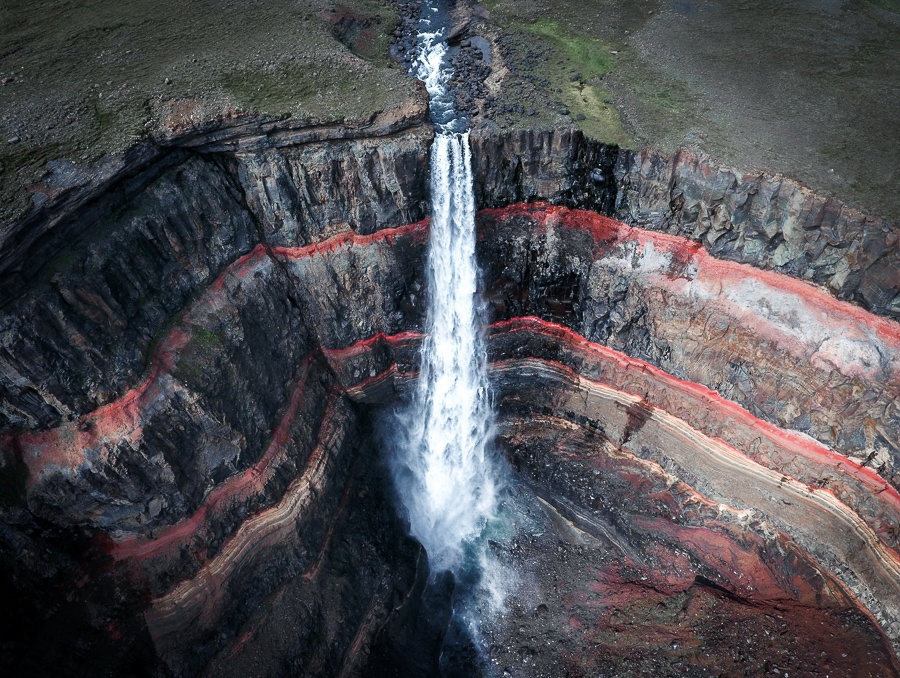 This is a waterfall you’ll hike past on your way to Hengifoss. Like Svartifoss (#5), this is another waterfall surrounded by weird looking basalt rock columns.

Litlanesfoss may not be the biggest waterfall in Iceland at 30 meters tall, but it wins in uniqueness, and it’s a freebie if you’re already hiking to Hengifoss. Two incredible waterfalls in one short hike! 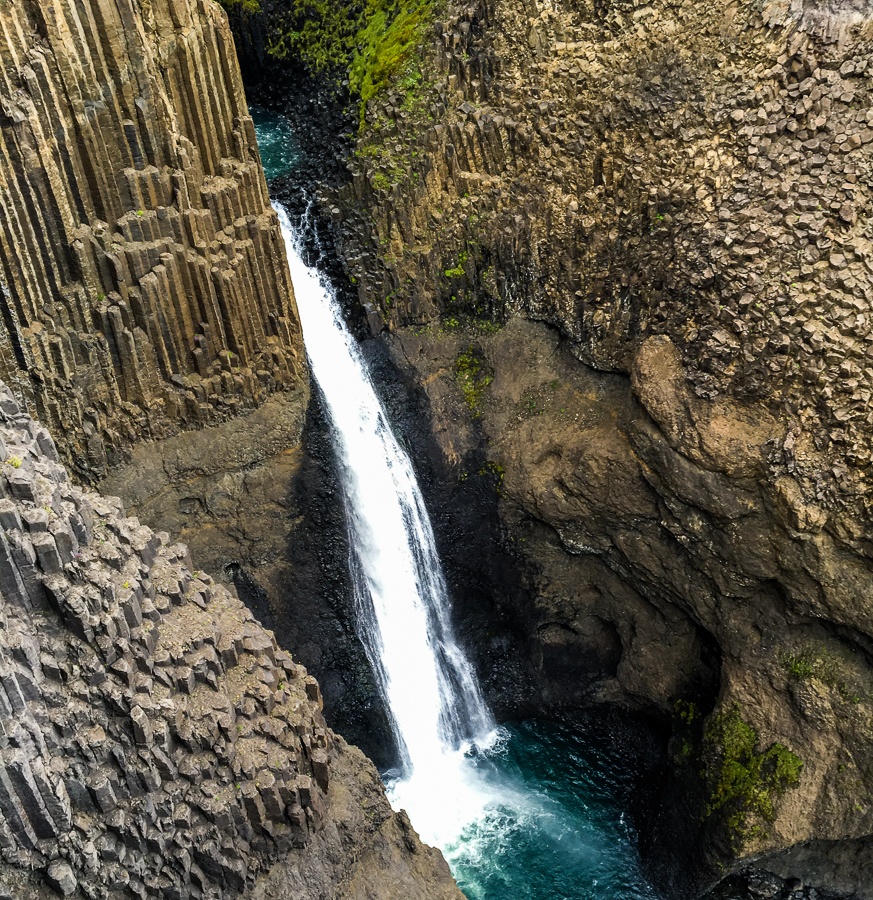 This is a great waterfall that looks a bit like a twin of Skogafoss, but much less crowded with tourists. Just like Skogafoss, it’s a big waterfall pouring down into a rocky stream, and you can do a short hike up to the top of the waterfall if you’d like. 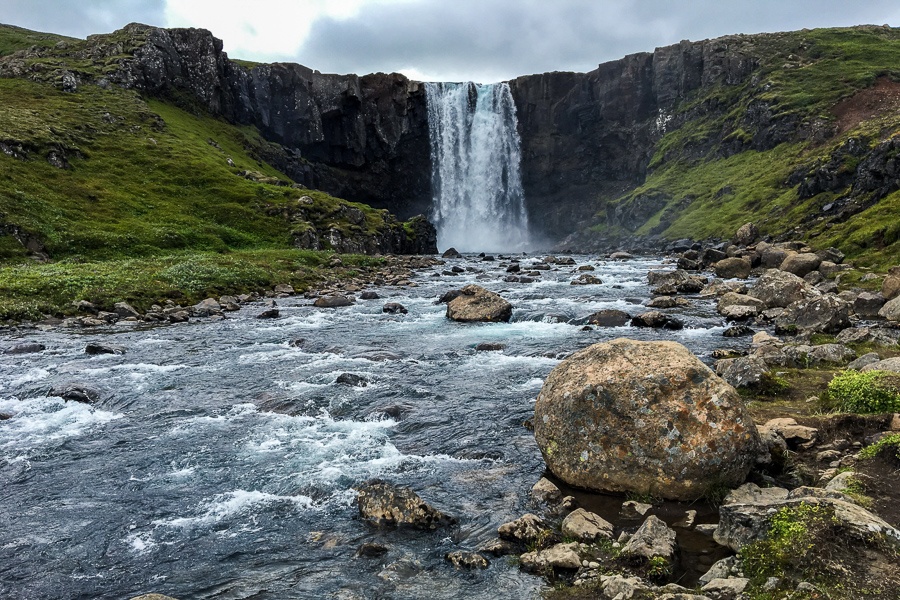 This is the most powerful waterfall in Europe and it’s fed by a huge glacial river. The chaos and sheer volume of water pouring through here is crazy to watch. Don’t go too close to the edge like I did! I couldn’t resist getting a better look.

Dettifoss is about 170 kilometers (105 miles) east of Akureyri, and only requires a 40 minute detour from the Ring Road, so it’s not difficult to visit if you make it over to eastern Iceland. 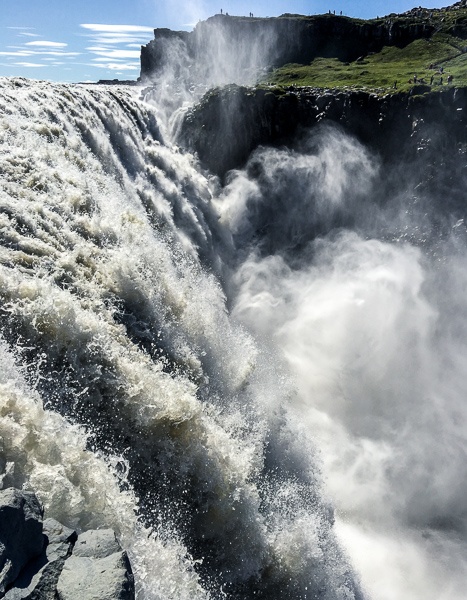 The medieval leader of Iceland symbolically threw the old Norse idols into this waterfall when Iceland converted from paganism to Christianity. The name Godafoss comes from this story and it means ‘waterfall of the gods’.

Godafoss is a group of falls joined together into one horseshoe shaped waterfall with awesome blue colors that look a bit unreal. It looks kind of like a mini Niagara Falls, doesn’t it?

Godafoss is located about 50 kilometers (30 miles) east of Akureyri in northern Iceland. It’s right near the Ring Road, so it’s a no-brainer to visit if you’re in eastern Iceland! 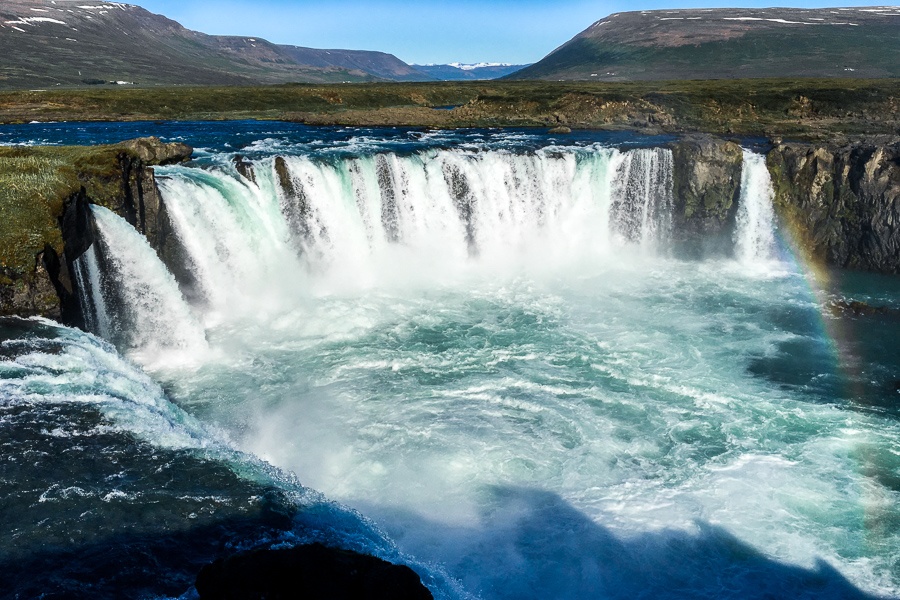 This is one of the biggest and most impressive waterfalls in Iceland. It looks like a thousand little waterfalls combined into one huge waterfall flowing over the rocks. The height is 100 meters and it is LOUD. You can hear it from the parking lot, almost a kilometer away.

Dynjandi is located in the Westfjords, making it one of the more remote waterfalls on this list. It’s about 360 kilometers (220 miles) north of Reykjavik, and you have to drive on some steep and scary roads in the fjords, but it’s still possible to reach it with any 2WD rental vehicle. If you’re feeling up for the challenge of getting there, this really is one of the best waterfalls in Iceland.

Can you see tiny me in the picture below? 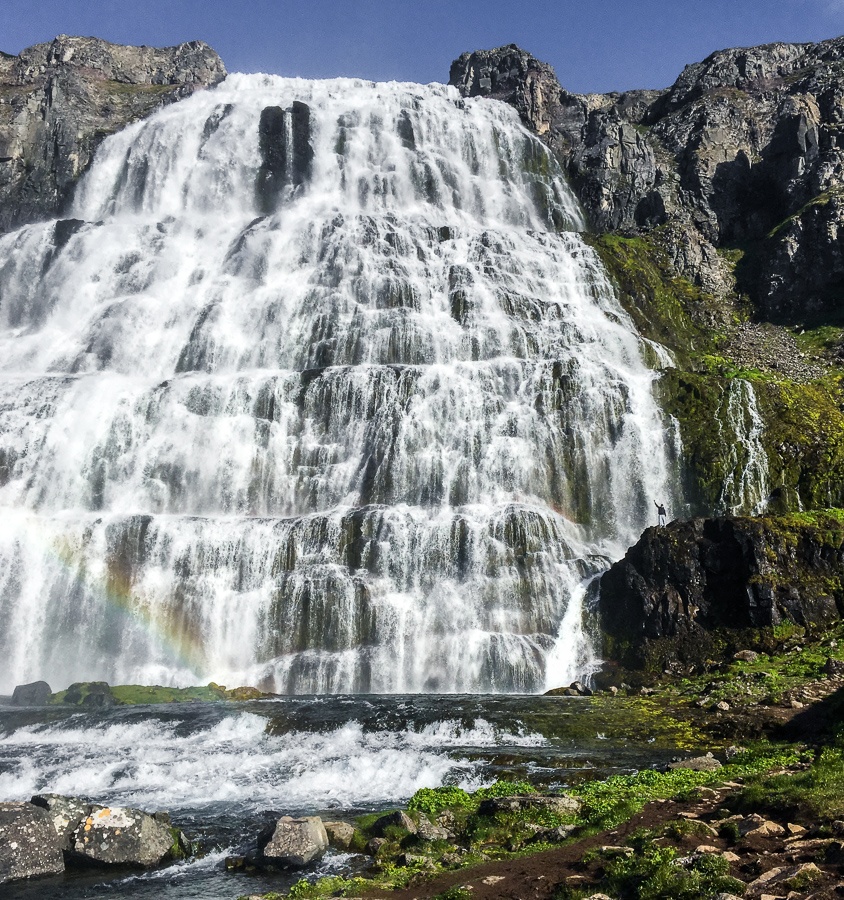 Kirkjufellsfoss is an iconic waterfall. Nothing screams ‘Iceland’ quite like this view of the green mountain and three mini waterfalls.

The name for this waterfall means “church mountain falls” and it comes from the peak in the background that is shaped kind of like a church. Personally I think it looks more like a wizard hat, which would be fitting because this location also looks like a scene from Lord of the Rings. 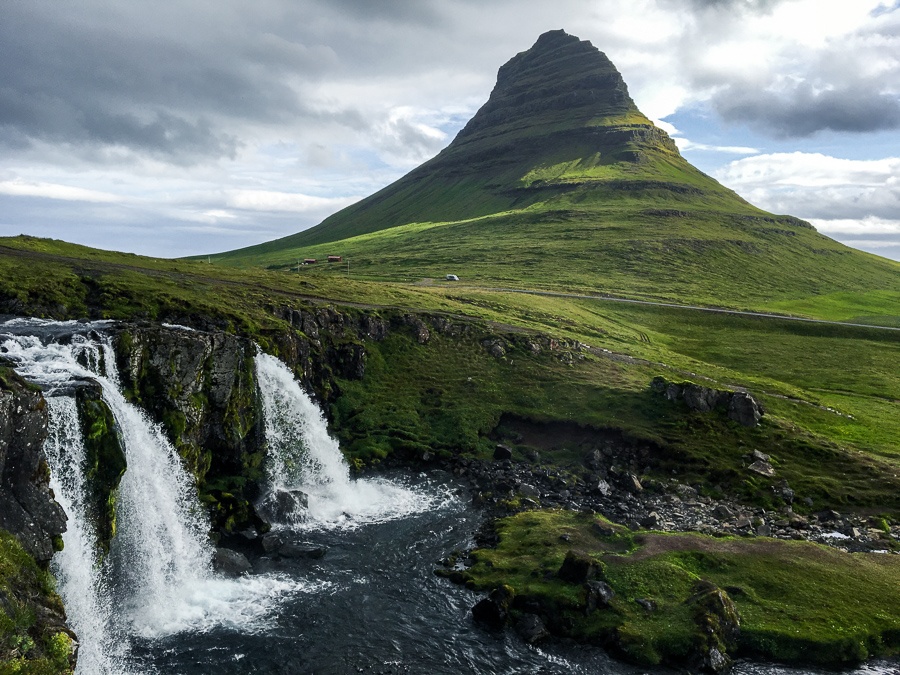 I think Bruarfoss wins the award for bluest waterfall in Iceland, and possibly in the world. It’s a pretty simple waterfall running into a crevice in the rocks, but you have to admire the colors of the black volcanic rocks mixed with the perfect blue glacier water. It’s just unreal. 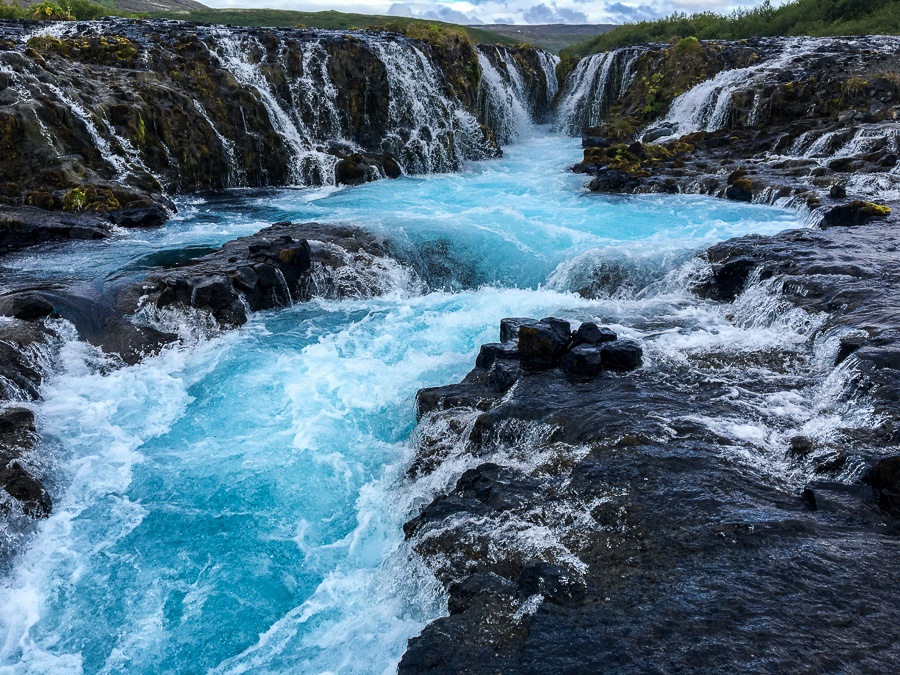 Gullfoss is part of the Golden Circle, one of the most popular tourist routes in Iceland. This is a big waterfall that goes down in two steps and has a bunch of different viewpoints. This one is only a 1.5 hour drive from Reykjavik, so that’s partly why it’s one of the most famous falls in the country. 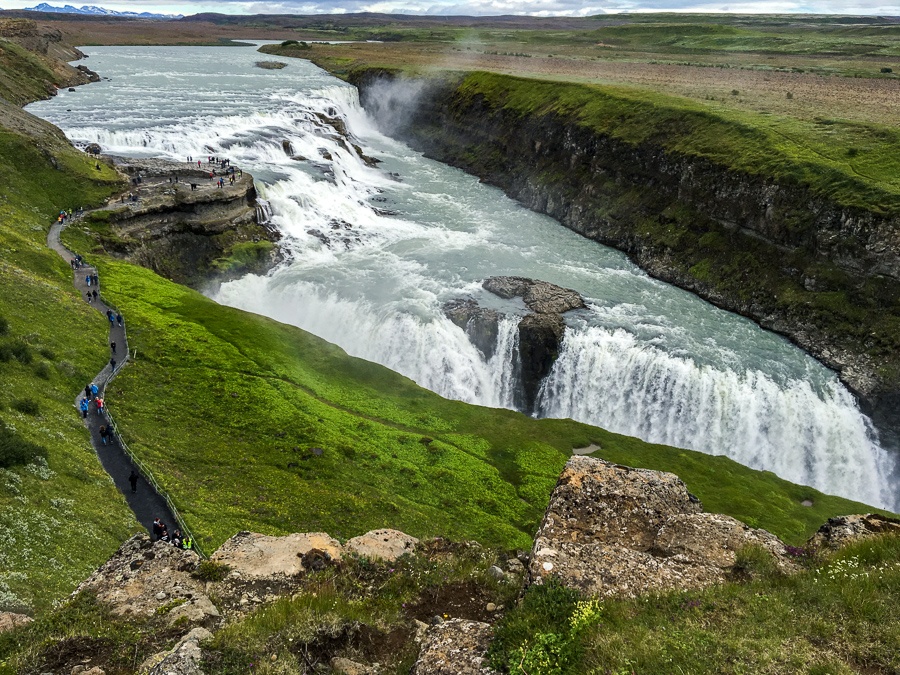 Haifoss is easily one of my favorite waterfalls in the whole country of Iceland, but it’s also one of the harder ones to reach. Don’t let that hold you back!

The main waterfall is 120 meters (400 feet) tall, making it the 3rd tallest waterfall in Iceland. There’s also a second (huge) waterfall running into the same canyon, which is a pretty impressive canyon in itself. The resulting panoramic views you can get here are mind blowing. 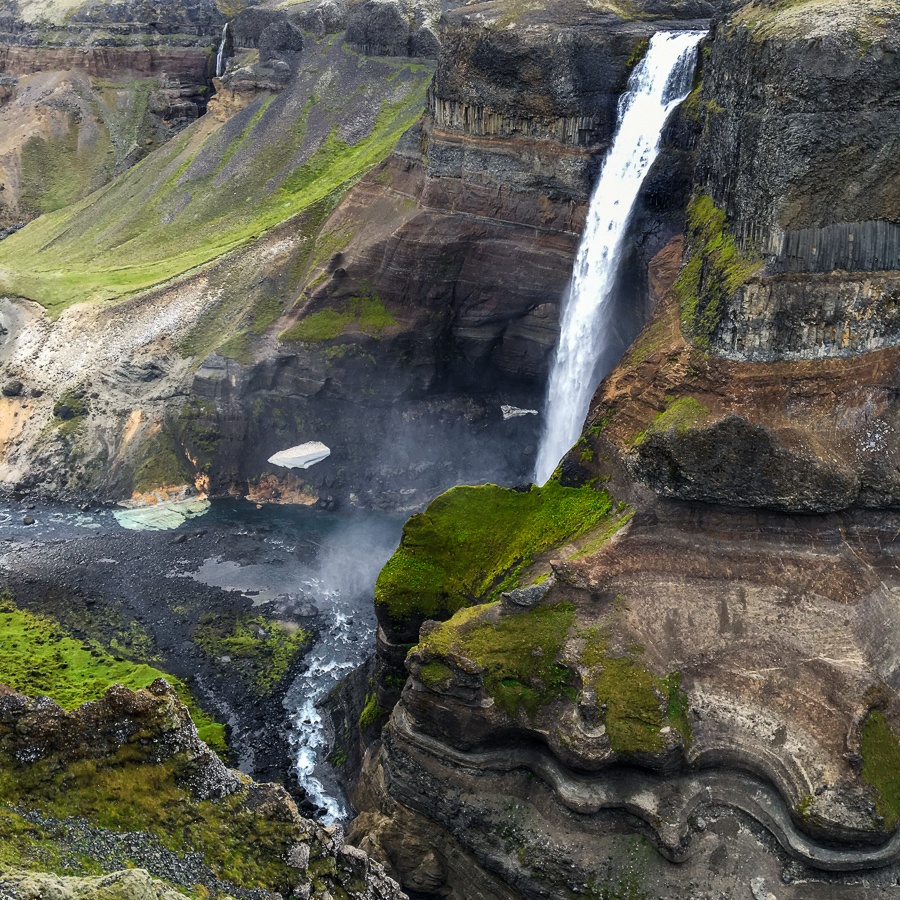 I hope you were helped by this map and list of the best waterfalls in Iceland.

This country has so many nice waterfalls, and if you’re lucky you may even get to see some wildlife in Iceland at these same places.

Which falls is your cover image?

Hi John. That one is Kvernufoss waterfall (#4 on the list).