Angels Landing Deaths List: How Many People Have Died?

The infamous Angels Landing hike in Zion National Park is commonly rated as one of the most dangerous hikes in the United States, and if you look at an Angels Landing deaths list it’s easy to see why.

So how many people have died on Angels Landing? As of 2023, at least 17 confirmed deaths have happened on the Angels Landing hike, and some sources put that figure closer to 20 deaths. Most of these were falls from steep cliffs.

The Angels Landing deaths list in this article is the most complete list of its kind available on the internet at the time of writing (2023), although some details are still missing.

The reason I’m sharing this information is to motivate you to be as safe as possible at Angels Landing, and also so you can make an informed decision about whether it’s the right hike for you. I don’t want to discourage you from doing this hike if you’re able.

Don’t get me wrong, Angels Landing is a very scenic and amazing hike (one of my all time favorites), but it’s a hike to take seriously, and not everyone should attempt it.

What Is Angels Landing?

Angels Landing is an epic and scary trail that takes you up the side of a steep sandstone mountain, with chains to grab onto for safety, and amazing views of the Zion National Park surrounding you on all sides.

At times, the trail will only be a few feet wide, and you’ll have to hug the side of the mountain and hold onto the metal chains, which may be the only thing keeping you from falling.

It has lots of tips, info, and photos for the hike. Definitely give it a read if you plan to visit Angels Landing! 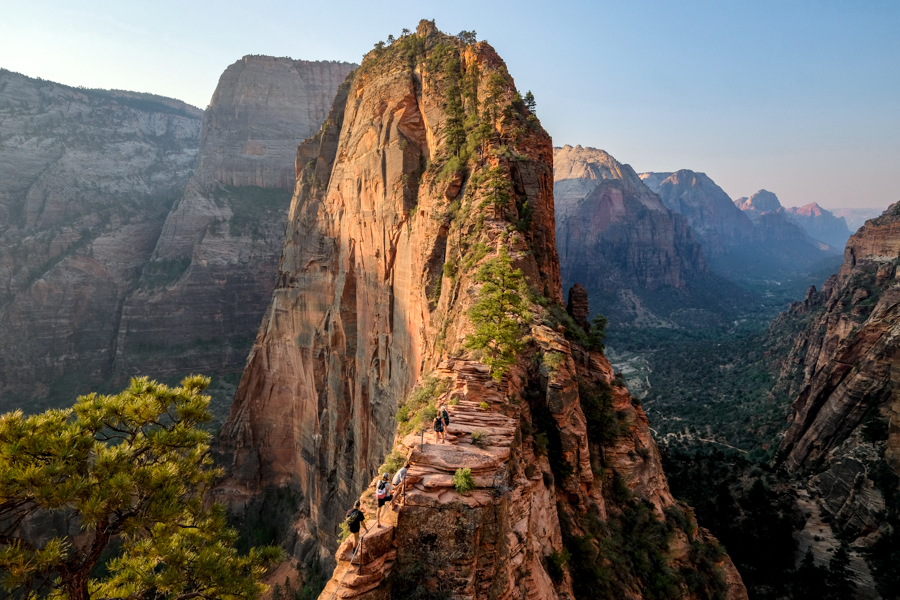 Read my complete guide for the Angels Landing hike before you go to Zion.

How Many People Have Died On Angels Landing?

There has been a bit of confusion about how many people have died on Angels Landing in Zion, so here is what seems to be the most accurate figure.

First of all, there were 12 deaths on Angels Landing from 1908 to 2016. This is according to the definitive book Deaths And Rescues In Zion National Park (2nd Edition), which was written by Zion veteran Dave Nally and Bo Beck, a senior search and rescue member in Zion for 20 years.

This means when you add the 5 recent deaths that have happened on the trail since 2016, you get a total of 17 confirmed deaths on the Angels Landing hike as of 2023.

One thing is for sure — Angels Landing is one of the most dangerous hikes in the Unites States, and plenty of people have died hiking it. 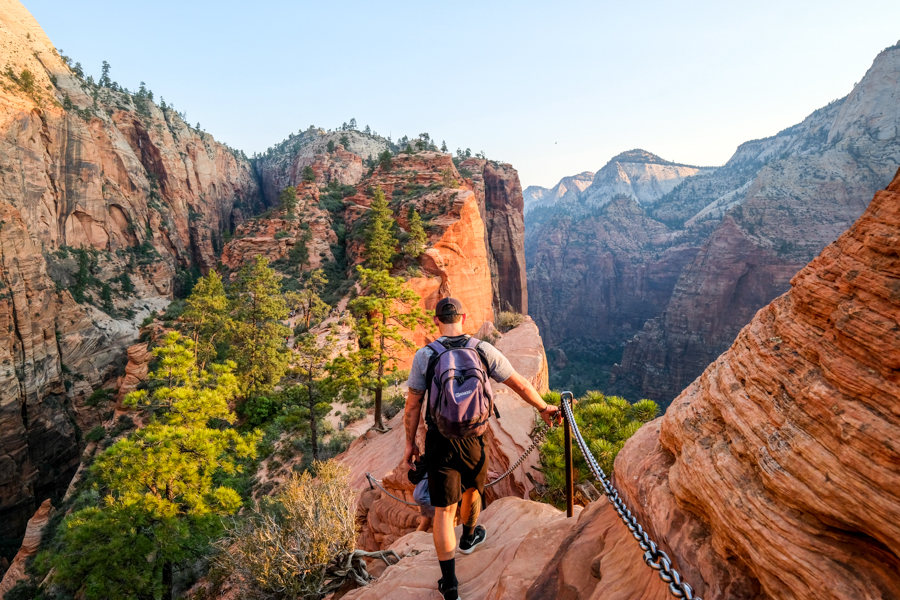 This Angels Landing deaths list is the most complete list of its kind available on the internet at the time of writing (2023), although some details are still missing.

The news reports in this list confirm that there have been at least 16 falling deaths from Angels Landing as of 2023.

Again, the reason I’m sharing this information is to motivate you to be as safe as possible at Angels Landing, and also so you can make an informed decision about whether it’s the right hike for you. I don’t want to discourage you from doing this hike if you’re able. 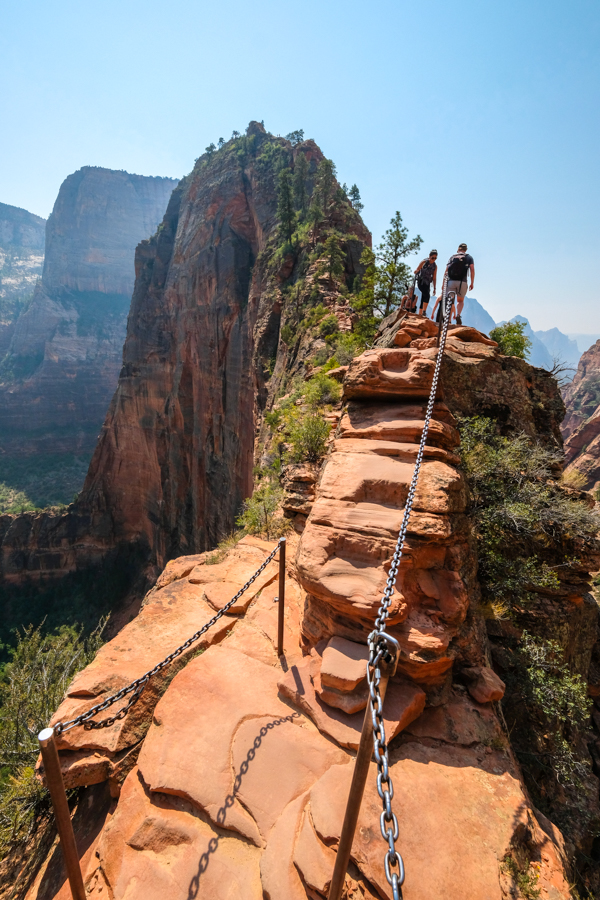 The Angels Landing hike in Zion is often rated as one of the most dangerous hikes in the United States, and if you look at an Angels Landing deaths list it’s easy to see why.

How Did They Fall?

These are always the big questions in my mind when I hear of tragic accidents like this: “How did they fall? What happened? How can I avoid this happening to me or my friends?”

Every case is different and unfortunate, but it does seem like at least some of these deaths were clearly avoidable. Kids shouldn’t be doing this hike unsupervised, and of course you can’t goof off near the edge of a 1,500 foot cliff.

These Angels Landing death stories are still tragic, but diving into the details gives a clearer perspective of the risk level for an average hiker, and it shows that accidents like this are less likely to happen if you’re being careful.

The last time we did this hike in 2021, we saw a couple of young guys foolishly walk over to the edge of a sheer 1,500 foot cliff and crawl partway down the side for ‘cliffhanger’ pictures. I consider myself a bit of an adrenaline junkie, but I was certain we were going to witness their deaths.

Again, I don’t want to imply that everyone who has died on the Angel’s Landing hike was being careless or foolish. I don’t know if that’s the case, but it does seem like at least a few of them were.

If you’re curious about more of the details surrounding the Angels Landing death stories and other close calls, I’d recommend you check out the book Deaths And Rescues In Zion National Park by Dave Nally, which explains some of the history of these kinds of incidents.

Another book on the same topic is Death In Zion National Park: Stories Of Accidents And Foolhardiness by Randi Minetor. 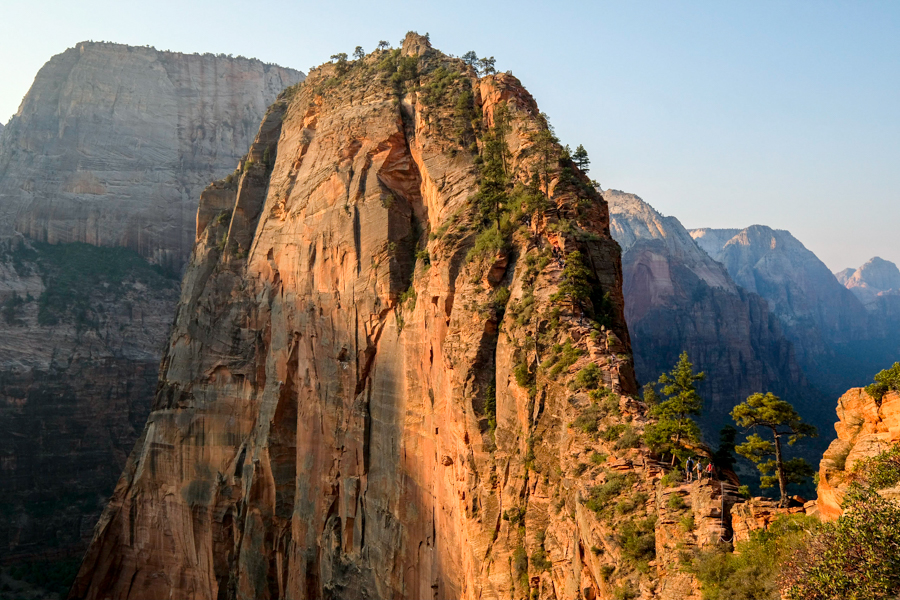 First views of the sandstone ‘spine’ 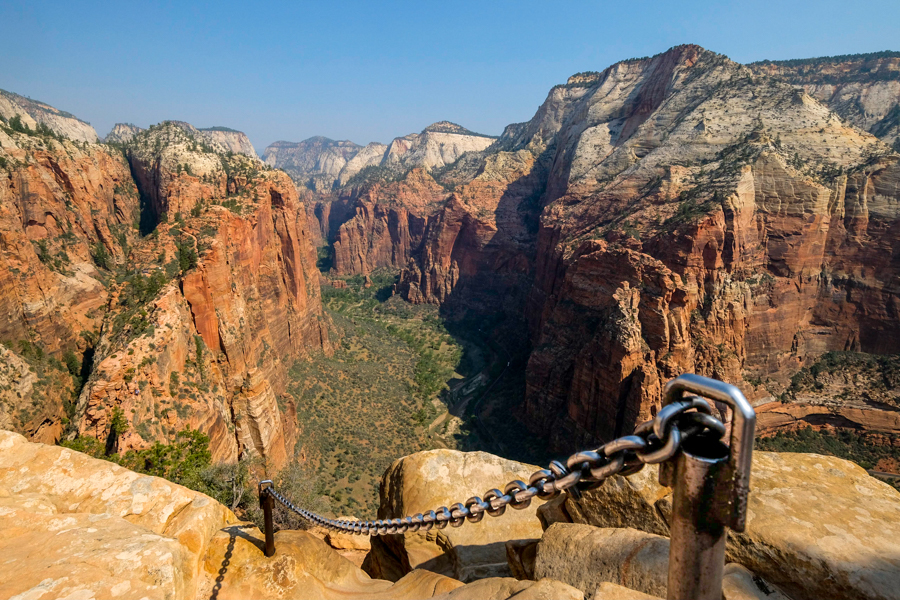 Looking back after the last Angels Landing chain section

There have also been plenty of close calls, rescues, and deaths on the Angels Landing hike that didn’t involve people accidentally falling from the cliffs.

Here are a few of the most well known examples: 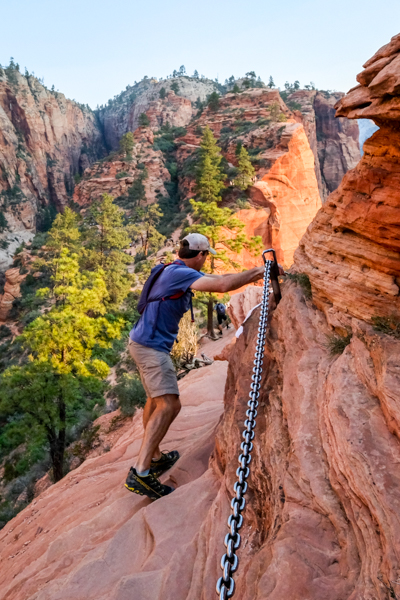 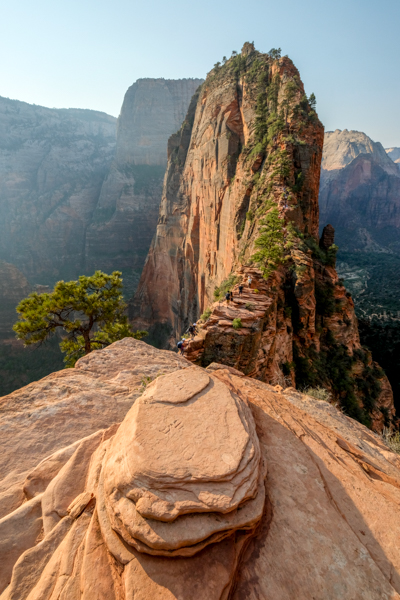 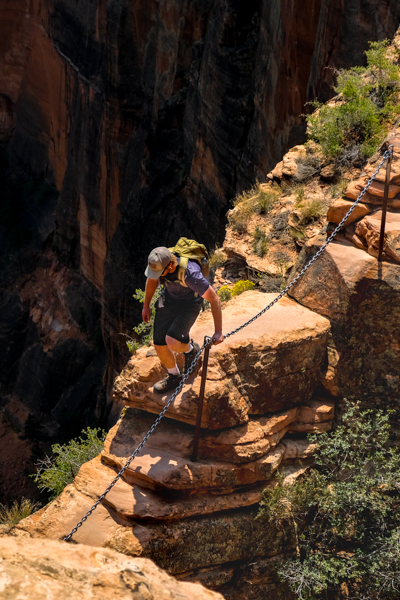 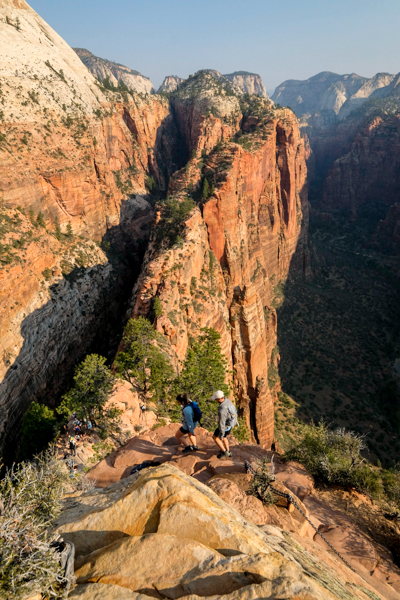 Is Angels Landing Dangerous Or Safe?

I still think the Angels Landing hike is plenty safe and not too dangerous if you take it seriously.

The Angels Landing deaths list above doesn’t really tell the whole story. For starters, more than 300,000 people successfully completed this hike in 2020. I’ve done it twice myself, and I’d happily do it again.

If we assume there’s 1 death on the trail every year, out of 300,000 total hikers, that basically means there’s a 0.0003% yearly fatality rate. However, if you’re a safe hiker and you don’t goof off, realistically, your odds of getting hurt are probably pretty close to zero.

That may not be the most politically correct way to say it, but I’m sure the National Park Service has had similar thoughts, and that’s probably why the trail has remained open and relatively unchanged all these years. 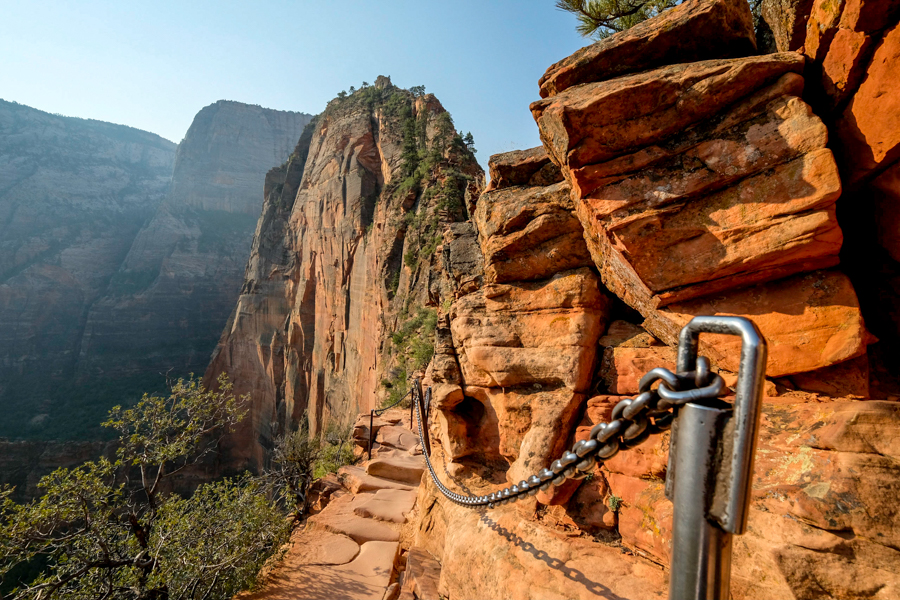 The Angels Landing chains are metal and sturdy, so you can rely on them.

For me personally, I have to say I didn’t find Angels Landing too scary at all after doing some very sketchy hikes around the world where there are no chains to hold. I expected Angels Landing to be a lot worse than it is.

With that said, I would not recommend this hike for young kids, unfit older folks, or anyone who is not surefooted and comfortable with heights.

I also wouldn’t attempt Angels Landing when it’s windy, rainy, snowy, or icy. You want decent weather for this one so the rocks aren’t slippery. 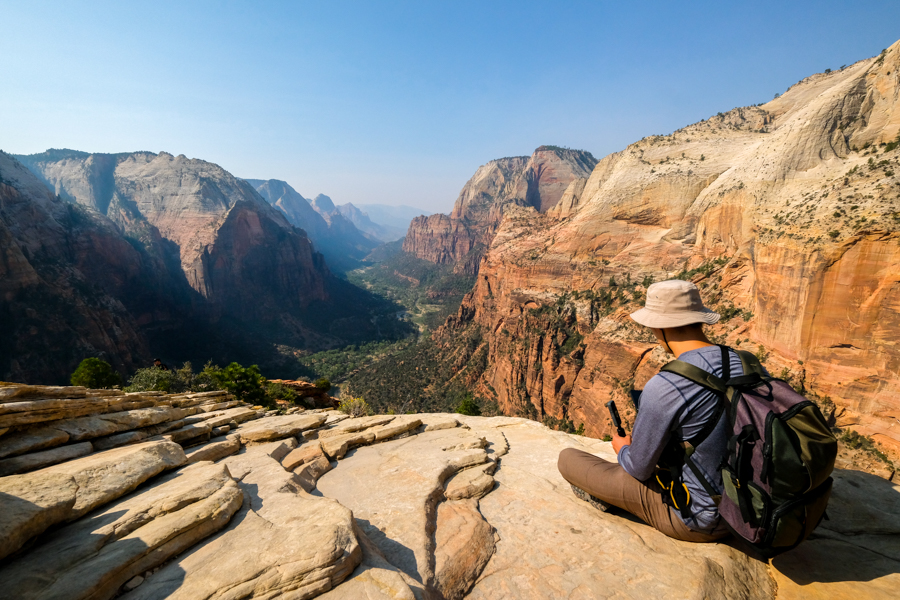 Chilling at the top.

For safety sake, always make sure you have at least one hand on the chain.

This is especially important when you’re passing other hikers going the opposite direction, because you’ll be tempted to let go of the chain to get around them.

You don’t want a passing hiker to trip you, bump you, or fall into you when you’re not holding the chain. That could be lethal. No matter what happens, always put safety first.

If you’re still feeling unsure about Angels Landing, you could hike Observation Point instead. It’s another hike in Zion with stellar views of the whole park, and it doesn’t have any of the safety risks or permit hassles of this hike. 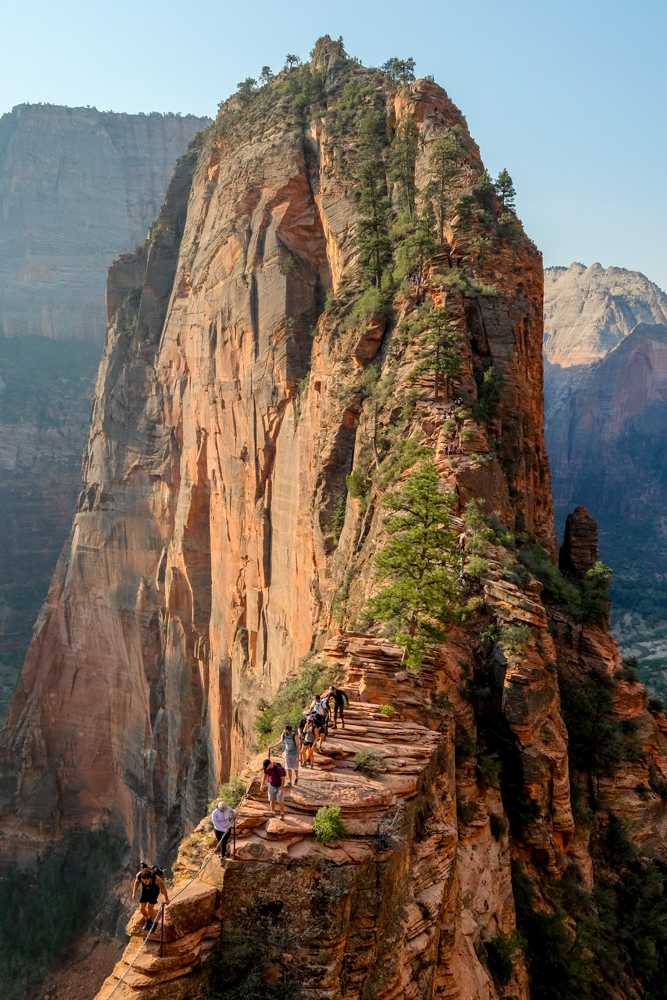 The craziest view on the Angels Landing hike

Why Do People Hike Angels Landing?

I know what you were probably thinking after seeing the list of how many people have died on Angels Landing: “Why would anyone want to do that hike?!”

Some people do Angels Landing for thrills or a challenge, but it’s also extremely scenic, with some of the best views of Zion National Park surrounding you on all sides.

I’d still say the summit of Observation Point gives you a better overall view of Zion Canyon, but the views on the Angels Landing chain section are more unique, epic, and memorable.

In any case, Angels Landing is a fantastic hike, and I’m glad the National Park Service hasn’t dumbed it down too much in the name of public safety.

If you’re looking for a much safer hike in Zion with some of the same amazing views, I’d recommend Observation Point trail.

On the other hand, now that permits are required for the Angel’s Landing trail since 2022, that has reduced the crowds a bit and the overall safety of this hike is better than ever. That may be why there were no deaths on Angels Landing in 2022. 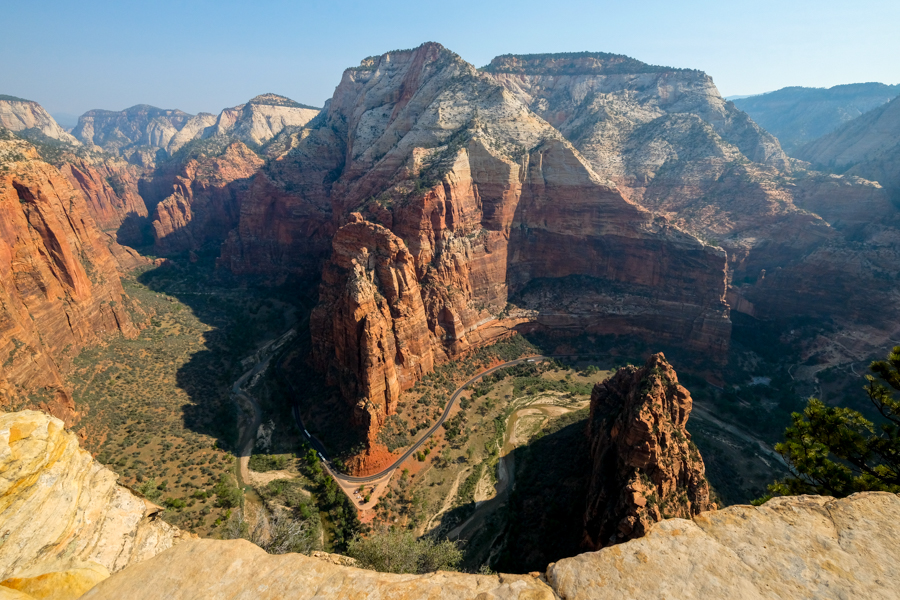 One of my favorite views at Angels Landing. 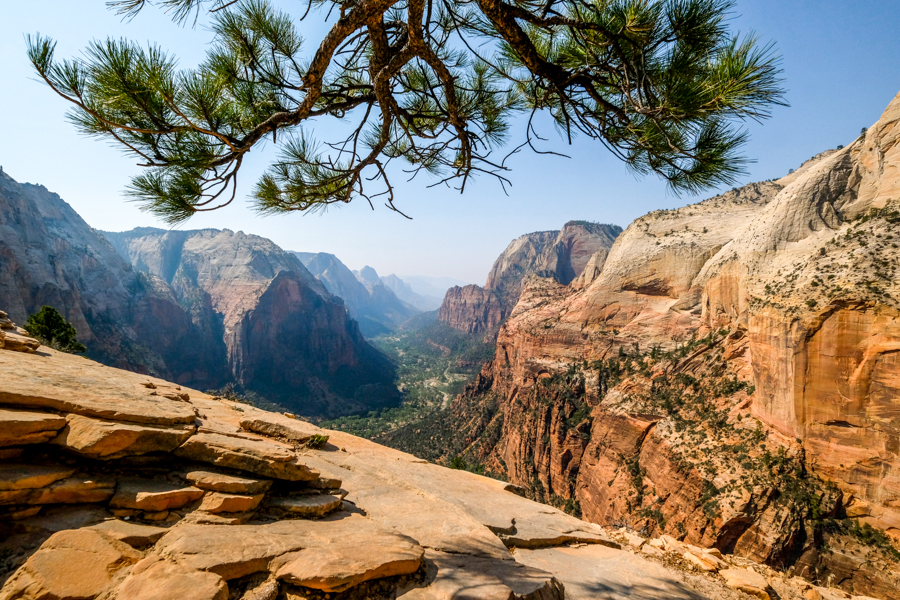 The final Angels Landing view is an epic 360 degree panorama of cliffs and canyons. Is it worth the danger? You decide.

Starting in 2022, the National Park Service requires day use permits (via lottery) for the Angels Landing chain section. This is a new pilot permitting system.

The reason for this change was because the trail was becoming very crowded, and oftentimes you’d be passing other hikers going the opposite direction, which was annoying and made it less safe for everyone.

I have mixed feelings about the change. While it’s true Angels Landing was a crowded hike and some changes were needed, I don’t know if a lottery is the best way to do it.

This is one of the main bucket list hikes that brings people to Zion, and for many people it’s not convenient to plan their schedule around a lottery. The system seems a bit overcomplicated right now since it’s brand new, but hopefully they’ll iron out some of the kinks over time.

In any case, it’s still an amazing hike, and you can find more details about how to get a permit in my complete Angels Landing hiking guide.

Where To Stay At Zion 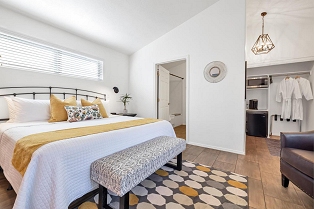 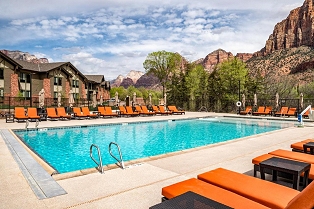 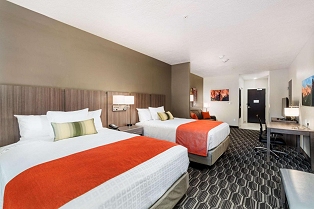 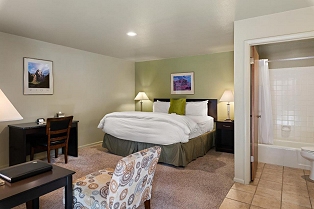 Thanks for looking! I hope you were helped by this safety guide for the Angels Landing trail in Zion National Park, Utah.

Don’t forget to check out my other Utah hiking guides before you go!