Medinet Habu Temple is one of the ancient Egyptian temples in Luxor that was built by pharaoh Ramses III and dedicated to the god Amon.

In my opinion, Madinat Habu is one of the best temples on the West Bank, and it’s easy to combine with other nearby sites in Egypt like Valley of the Queens or Hatshepsut Temple.

This travel guide will explain how to get there, and everything you need to know before you go!
Contents hide
1) Facts & History
2) What To Expect – Medinet Habu Temple
3) Hours & Entrance Fees
4) How To Get There
5) Where I Stayed
6) You Might Also Enjoy

The Medinet Habu Temple (also spelled Madinat Habu) was built in the New Kingdom period of Egypt as a mortuary temple (tomb) for Ramses III, the last great pharaoh of Egypt.

Reliefs on the temple walls show the Egyptian army’s dramatic victory over the Sea Peoples, who were defeated by Rameses III when they tried to invade Egypt by land and sea in the early part of his reign.

Excavation of the Madinat Habu Temple ruins first began from 1859 to 1899, and a more recent work was started in 1924 that continues to this day. 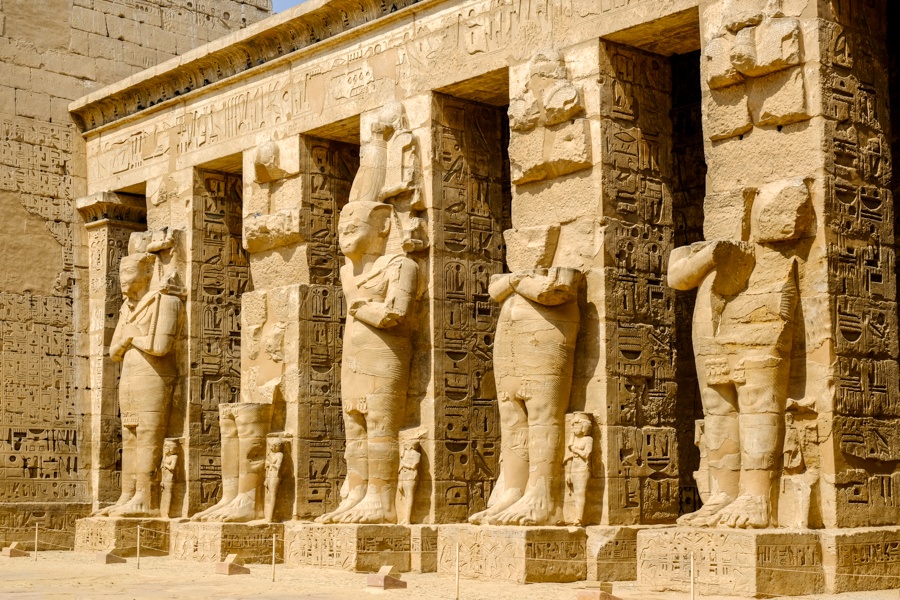 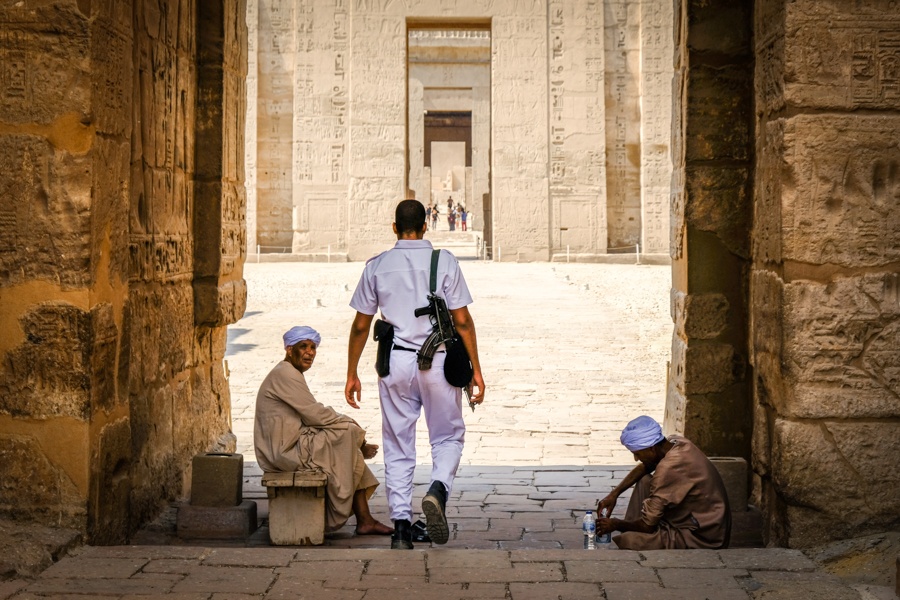 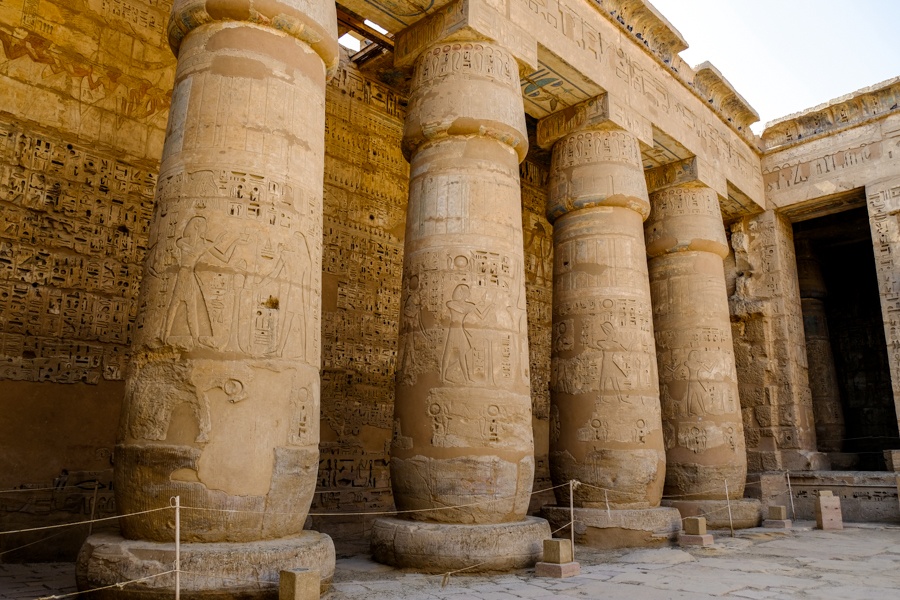 What To Expect – Medinet Habu Temple

Medinet Habu is a joy to explore, with way less tourists than some of the other Luxor temples like Hatshepsut, although it probably deserves just as many.

The inside and outside are covered with incredible hieroglyphic carvings. Don’t forget to look up! The artwork here is some of the most dramatic and colorful you’ll see in Egypt.

The famous reliefs of the Sea People invasion can still be seen today on the northern outside wall. Medinet Habu is usually overlooked by the tourist hordes, but the inside is truly amazing and I think it’s one of the best places to see near Luxor.

Medinet is easy to visit as a West Bank day tour combined with the Colossi of Memnon, Hatshepsut Temple, the Valley of the Queens, and other sights. 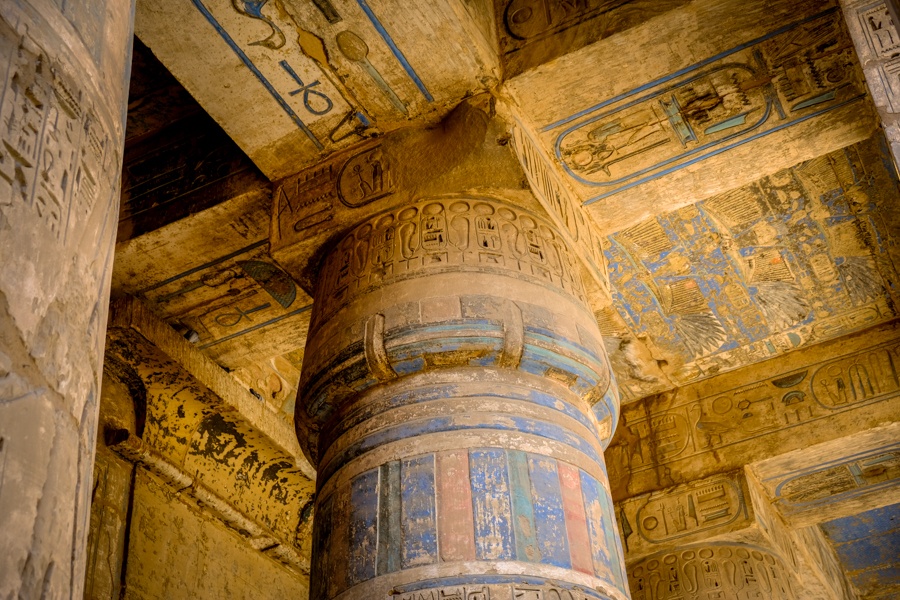 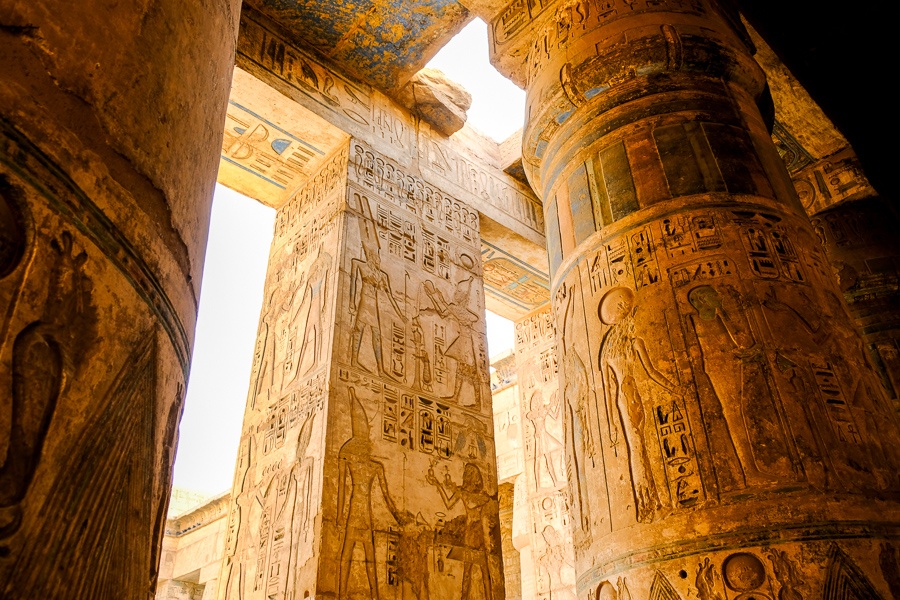 *If you buy the Luxor Pass, this is one of the temples included in the pass.

Medinet Habu is located on the west bank of the Nile River, on the outskirts of Luxor, Egypt.

The Cairo International Airport (CAI) has 1 hour direct flights to the Luxor airport (LXR) for around $90 USD or less, or you can take a 9 hour day train for around $10 or so.

Once you’re in Luxor, it’s easy to find a driver to take you to Habu and other sites on the west bank for about 300 EGP (~$20 USD) for the whole day. Your hotel can probably arrange this too. 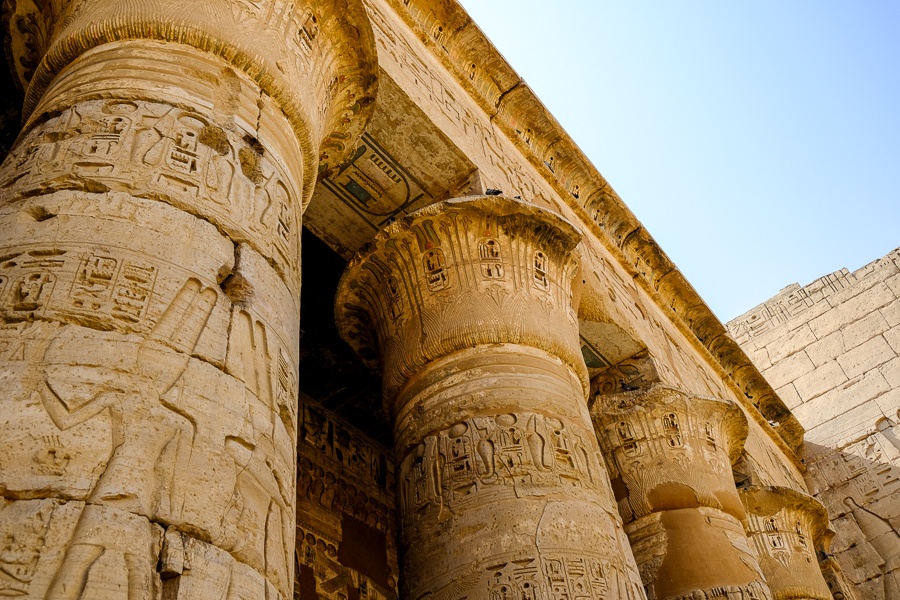 For this price, I got a clean triple bed room with cold A/C, good WiFi, a pool, kitchen and washer/dryer, and a big rooftop area with a nice sunset view.

The owner was friendly, and it was in a handy location near the Nile, ferry, and restaurants. All in all, this apartment was one of my favorite places I stayed in Egypt.

Prices may fluctuate from time to time, so just keep an eye out for a good deal!

My wife and I are usually traveling in Bali, but my journeys take me to destinations all over the world.

Endless lagoons of Sombori Island. See our boat on