Svartifoss Waterfall is one of the most unique and amazing falls in the country of Iceland.

The name means ‘black falls’ and it comes from the dark lava basalt columns surrounding the waterfall that look kind of like organ pipes. 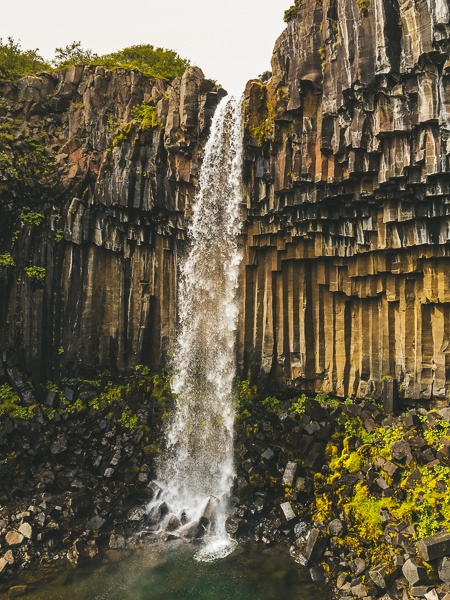 The Svartifoss waterfall and rock columns can’t be seen from the parking area at Skaftafell, but the hike to the falls is pretty straightforward and only takes about 30-45 minutes.

Svartifoss may look small in photos, but it’s actually about 20 meters tall! Svartifoss height is hard to appreciate without a person nearby to show the scale.

After you reach the falls, you can just return the way you came, or else you can continue past the bridge at Svartifoss and this will take you on a loop hike.

If you do the loop hike, it includes a few other small waterfalls; they’re not as impressive as the main event, but you might as well pay them a quick visit on the way back!

A cool fact is that the basalt rock columns at Svartifoss were an inspiration for the architectural design of Hallgrímskirkja Church, one of the well known landmarks in Reykjavik.

Maybe it’s just me, but the rock columns also remind me of the patterns you see on Icelandic sweaters. The basalt columns are similar to the ones you can see at places like the Giant’s Causeway in Ireland, or the Devil’s Tower in Wyoming, USA.

The combination of basalt columns with a waterfall is especially cool, and the only other place I can think of where you could see something similar (outside of Iceland) is Abiqua Falls in Oregon, USA. 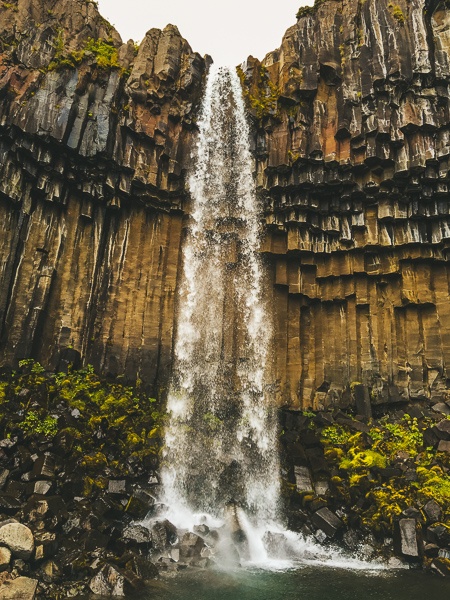 There’s a fee of 750 ISK ($6 USD) required to park here and visit the waterfall.

How To Get To Svartifoss Waterfall

Svartifoss Waterfall is located in southeast Iceland, near the coast.

From Reykjavik, drive east along the Ring Road (Route 1) until you reach Skaftafell, in the Vatnojokull National Park. Svartifoss is about 330 kilometers (200 miles) from Reykjavik.

From the parking lot, it’s a 30-45 minute hike to the waterfall.

I think Svartifoss Waterfall looks nicest in the summer months (June – August), when there’s green grass and moss on the basalt rocks below the falls.

The waterfall is usually accessible in winter too, and it can also look nice surrounded by a bit of snow and nice.

Santorini Greece Travel Guide: Things To Do In Santorini Island

Kefalonia Greece Travel Guide: Things To Do In Kefalonia Island

What are the best months to visit Black Falls?

Hi Brandee. I think the waterfall looks best in the summer months (June – August), but it’s also accessible in winter and looks nice with the snow. Enjoy